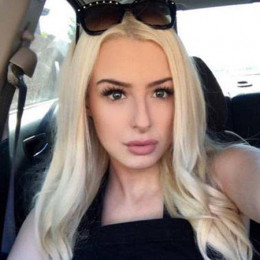 Tana Mongeau is a popular YouTube creator, who discuss strange instance from her personal life as well as her own personality quirks with her subscribers on her self-titled channel. She first joined YouTube in April 2015 and quickly gained subscribers. Mongeau also has mercy out which features t-shirts, crop tops, phone case and more. Tana is very active in her social media and likes to communicate with her subscribers. Tana had a very rough childhood and had to deal with constant fighting in her home. At a very young age, Mongeau was exposed to parties, smoking and drugs and smoked weeds at the age of 14 which ended badly.

Talking about her personal life, she was linked to an affair with Somer Hollingsworth whose nickname is “pet nut”. She is in a relationship with him since 2015 and frequently posts pictures with him on Instagram. Tana first outed her boyfriend to the world in January 2016. She hasn’t mentioned about her exes and she is happy with Somer. She keeps updating about her and her relationship through social media.

More: Who is Elijah Daniel?

Updated: Tana dated fellow YouTube Jake Paul whom she even married in Las Vegas in 2019. Their wedding wasn't legal though. But not less than six months later, Tana and Jake decided to split in Jan. 2020. A month later, Jake was seen romancing model Julia Rose. Moreover, Rose even appeared on Paul's music video for 'These Days.'