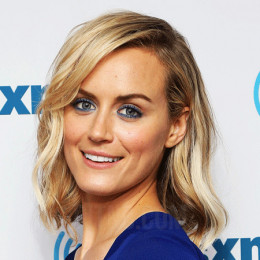 An American actress Taylor Schilling who is famous for her portrayal of Piper Chapman in the Netflix series Orange is the New Black for which she won Satellite Award for Best Actress in a Television Series in 2013. She is the daughter to Patricia (née Miller) and Robert J. Schilling. Her parents got divorced when she was still young. In 2002 she graduated from Wayland High School. She holds degree of Bachelor of Arts from Fordham University's campus at Lincoln Center. She started her career in acting debuting through supporting role in the independent film Dark Matter (2007). She was also selected to play Nurse Veronica Callahan in the drama Mercy. In 2014 she was honored with Primetime Emmy Award for her lead role in a Comedy Series.

There is a great dispute going on among fan if she is straight or lesbian. There is a rumor that she is dating her girlfriend which rises more suspicion if she is a lesbian.

But she has not officially declared anything regarding her sexuality. She is a regular user of Twitter and her fan can follow her in @TaySchilling which is her official twitter page to get updates on her.

She is tight-lipped regarding her dating life. Her interviews revealed some big hints about her girlfriend. During an interview in 2017, she said about her sexuality,

"I’ve had very serious relationships with lots of people, and I’m a very expansive human. There’s no part of me that can be put under a label."

She explained herself as a single saying,

"But I’ve had wonderful relationships. I’ve had a lot of love, and I don’t have any qualms about where it comes from."

She was rumored to be dating a male artist in 2018. During an interview with Gotham Magazine, she said,

"I’m not gonna talk about it...but someone special does live in Gowanus. It’s full of special people. It’s a special place."

Taylor Schilling was born on 27 July 1984 in Boston, Massachusetts.

She is renowned for her role as Piper Chapman on the Netflix original comedy-drama series Orange Is the New Black.

She made a horror movie debut in The Prodigy and the movie is rising controversies in the U.S.