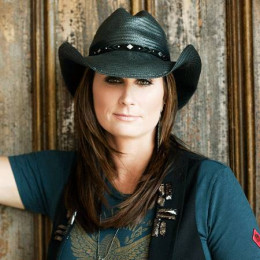 Terri Lynn Sauson aka "Terri Clark" who is best known for her 3 platinum selling albums: How I Feel, Terri Clark and Just the Same. In Canada, her album Fearless was certified Gold. She has earned four singles which are were placed no.1 such as: "If I Were You," "Emotional Girl," and "You're Easy on the Eyes". Her mother Linda belonged to the Canadian folk scene and her grandparents were both noted Canadian country musicians. Her last name was given by her stepfather.

Terri Clark was born as Terri Lynn Sauson on August 5, 1968, in Montreal, Quebec, Canada. Nationality wise she is Canadian and belongs to white ethnicity.

Clark was raised in Medicine Hat, Alberta along with her siblings; brother, Peter, and two older sisters, Kim and Tina. Her mother, Linda had belonged to the Canadian folk scene.

“Hey , It’s good to be back home again”. My pilgrimage to the mother ship of Canadian chicken .... I took the path of least resistance. Hearing the show is sold out, too :)). #saultstemarie #snowmaggedon2019 #johndenver

Her parents divorced when she was too small and her last name, Clark's was taken from her step-father.

Terri is interested in music since her childhood days, she used to works at a local Chinese restaurant to save money to move to Nashville, Tennessee. She attends Crescent Heights High School and completed her graduation in 1987.

After completing her graduation she moved to Nashville,  where she got her start playing at Tootsie's Orchid Lounge.

Terri first released her new single, Better Things to Do in 1995, shortly followed by her debut album Terri Clark. Her second single is “Emotional Girl” which reached number one in Canada and won the Fans’ Choice Award and Female Artist Award.

She announced releasing her first album "Raising the Bar" will arrive in September 2018.

Clark is possibly single at the moment but previously she was married twice. In 1991, she ties a knot with Ted Stevenson but the couple couldn't handle their relationship and divorce on September 17, 2005.

Later, she remarried with her tour manager Greg Kaczor on September 17, 2005. The couple's wedding was documented on In the Moment, a TV series broadcast on CMT in December 2005.

However, same as her previous marriage the second one also couldn't last long and the duo split apart on February 16, 2007. In Late 2007, she knew about her mother cancer. The tumor was removed, but Clark's mother died on April 4, 2010. Terri Clark currently lives in Nashville, Tennessee.

In Late 2007, she knew about her mother cancer. The tumor was removed, but Clark's mother died on April 4, 2010. Terri Clark currently lives in Nashville, Tennessee.

Terri has earned a quite impressive net worth from her singing career as she succeeds to maintain the net worth of $10 million.

He is the first husband of Terri who by profession is a fiddle fiddle player. The couple stayed together for five years.

He was the tour manager of Terri. Their wedding was documented on In the Moment, a TV series broadcast on CMT in December 2005.