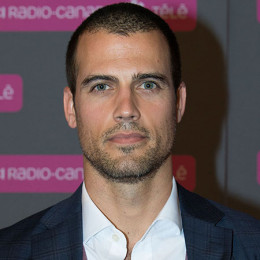 Thomas Beaudoin is a famous Canadian TV actor who is better known for his work in The Spirit of Christmas. The 37-year-old actor has also worked on the NBC series The Blacklist. Active in the industry for years, he makes a good net worth.

Thomas Beaudoin's Personal Life; Who is he dating?

Thomas Beaudoin is possibly single as of now. The Canadian actor is out of the controversies regarding his dating life and seems career oriented.

The Candian born actor is not romantically linked to any women even at his late 30s. He has good bonding with his co-actress from "The Spirit of Christmas".

Once, Thomas and Jen Lilley appeared in one of the youtube videos of Jen after which fans started speculating about their dating affairs. The actor was playing the piano while looking at Jen like she is the perfect one. Besides, they never admitted dating each other.

Thomas Beaudoing: Love in the Slopes

Beaudoin would be starring alongside Katrina Bowden in Hallmark crime drama, "Love of the slopes". Thomas shares amazing chemistry with Bowden in the movie. She would be starring the role of Cole, a sports enthusiast who agrees to be Alex (Thomas) guide as she faces her fears while Thomas portrays character of Alex, a copy editor from New York who's sent to extreme sports outpost to create a story for a travel writing competion.

Thomas Beaudoin estimated net worth might be somewhere $500,000 and all thanks to his acting career. The well-known actor believed to have a salary of $40-$50 per hour which is also the average salary of a television actor.

As being a bike lover Thomas owns a couple of custom made vintage bikes. He often goes for a ride and snaps pictures riding them. Take a look at one of his bike:

Beaudion is an active person on charities as well and teams up with many social charity groups like Gentleman's Ride. He is also a supporter of ASPCA, an organization which works to rescue animals from abuse and pass humane laws. Further, he even has adopted a dog to support the organization.