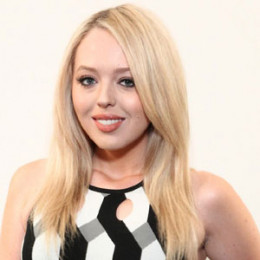 Tiffany Ariana Trump, better known as Tiffany Trump, is an American internet personality. She is the daughter of U.S. president, Donald Trump. She is also a singer and model. Her first released song was Like a Bird, which she released when she was attending her higher education. Also, she has worked for Vogue and modeled in New York Fashion Week in 2016. Currently, she is in a love relationship with Ross Mechanic who works as an intern in Cadre and Nets.

Her father is the 45th and current President of United States where as her mother is American actress and television personality. Her parents divorced in 1999 after which she was raised by her mother in California. Her step-mother is Ivana Zelnickova and Melania Knauss.

She attended Viewpoint School, Calabasas, California and got a degree in sociology and urban studies from the University of Pennsylvania. During her higher education, she was a member of the Kappa Alpha Theta sorority. According to the sources, President Trump announced that she would be attending Georgetown Law School in the fall.

While in the University, she released a music single, Like a Bird. She said to an American television personality Oprah Winfrey that she was evaluating whether to take her musical career to the next level as a professional or not.

Later, she worked as an intern at Vogue and modeled for Andrew Warren fashion show at New York Fashion Week 2016.

Apart from her singing and modeling, she actively participates in social sites including Instagram. As of 2017, she has more than 869k followers on her Instagram Account.

Talking about Tiffany’s love life, she is dating her class mate, Ross Mechanic, from the University of Pennsylvania. They started dating in 2015.

The couple was first photographed together in October 2015 and then onwards they usually share their daily activities on Instagram. The girlfriend-boyfriend were last spotted together in Winter Wonderland Ball in New York City.

She is a supporter and a member of Republic Party. She supported her father, Donald Trump in the 2016 presidential election with other members of the Trump family. She also spoke at the 2016 Republic National Convention on the second night of the convention.

Tiffany is one of the rising stars who has just stepped into the singing and modeling field. According to the sources, President Donald Trump is too close to her daughter and has taken care of all of Tiffany’s expenses and her education.

She has an estimated net worth of $10 million and shares $4 billion of net worth with her father Donald Trump. Currently, she is living a luxurious lifestyle with her mother Maples.