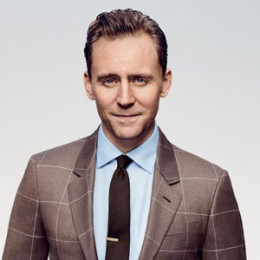 The English actor and producer Thomas Hiddleston is a well-known figure in the Hollywood Film Industry. He rose to stardom after his portrayal of the supervillain Loki, the adopted brother and enemy of superhero Thor in the hit movies Thor, The Avengers, Thor: The Dark World, and Thor: Ragnarok. He also is also notable for his performance as Captain Nicholls in the 2011 WWI drama War Horse. Hiddleston is not dating anyone at present but previously, he was involved in a relationship with several well-known Hollywood faces including Taylor Swift and Susannah Fielding.

Hiddleston is a British by nationality and he has mixed ethnical background as his father is from Greenock, Scotland whereas his mother is from Suffolk, UK. His older sister, Sarah, is a journalist in India whereas his younger sister, Emma, is also an actress.

Hiddleston spent most of his early days growing up in Wimbledon. He later moved to a Cotswold village near Oxford along with his family. Sadly, his parents divorced when he was 12 and studying at the Dragon School preparatory school in Oxford.

The following year, Hiddleston started boarding at Eton College before graduating with a double first in Classics from Pembroke College at the University of Cambridge. He made his appearance in A Streetcar Named Desire production by talent agent Lorraine Hamilton, of Hamilton Hodell.

Hiddleston, then, graduated from the Royal Academy of Dramatic Art in acting back in 2005.

Hiddleston began his career in acting featuring in Stephen Whittaker’s TV adaptation of Nicholas Nickleby in 2001, and later, in BBC/HBO co-production ‘Conspiracy’, the same year. The following year, he played the son of Winston Churchill in the BBC/HBO drama The Gathering Storm.

Hiddleston made his debut in the 2006's film playing the character of "Oakley" in Joanna Hogg's first feature film, Unrelated. He starred in the movie along with his sister Emma Hiddleston and many other actors including Kathryn Worth, Mary Roscoe and David Rintoul.

Afterward, Hiddleston portrayed major characters in a number of plays, including The Challenging (2006), Cymbeline (2007), and Othello (2008).

He won the Laurence Olivier Award for Best Newcomer in a Play for his remarkable performance in Shakespeare’s Cymbeline. That same year, he appeared in Michael Grandage’s production of Shakespeare’s Othello alongside Chiwetel Ejiofor and Ewan McGregor.

Hiddleston’s career took a major turn in 2011 when he played "Loki" in the Marvel Studios film, Thor. The movie garnered immense applaud both critically and commercially. Not only this, but his role also helped him to become popular on an international level. He featured the role in the movie alongside industry's top-notch stars, Natalie Portman, Stellan Skarsgard, Kat Dennings, and Chris Hemsworth

Following his blockbuster success, Hiddleston reprised his character as the supervillain Loki in The Avengers. The movie grossed more than $1.5 billion globally, making it his most financially successful film to date. He reprised his role for the second time as Loki in the 2013 sequel Thor: The Dark World. The movie received 7.0 IMBD ratings and also became commercially successful making $644.6 million worldwide, against its budget of $170 million.

In 2017, Hiddleston continued charming his audience with his role as Loki in the sequel Thor: Ragnarok. The movie grossed a whopping box office collection of 852 million worldwide whereas its producing cost was only $182 million and bagged 8.0 IMBD ratings.

He has also been involved in ad campaigns in villain-themed commercials to promote Jaguar Cars which first aired back in 2014 Super Bowl. Following this, he appeared in another commercial entitled "The Art of Villainy" that promoted F-Type coupe sports car. The video was highly criticized by the Advertising Standards Authority claiming that it "encouraged irresponsible driving." The commercial got banned after the complaints.

In 2010, Hiddleston went on to play the role of F. Scott Fitzgerald in a fantasy comedy movie Midnight in Paris followed by his notable role as Captain Nicholls in the novel based movie War Horse, under the direction of Steven Spielberg. He has also done a cameo in 2014 animated movie Muppets Most Wanted portraying the role of the Great Escape.

Hiddleston is all set to appear in his upcoming films Avengers: Infinity War and Untitled Avengers film.

Thomas "Tom" Hiddleston is not married yet but has been rumored to be dating several Hollywood divas with his only confirmed relationship with actress Susannah Fielding in 2011.

Hiddleston was involved in a relationship with the high-profile and celebrated singer Taylor Swift just two weeks after she broke up with ex-boyfriend Calvin Harris in June 2016. The former couple first appeared at the 2016 Met Gala in May.

And his dating rumor with Taylor came out to the public after they were spotted kissing on a beach in Rhode Island in June and began officially dating in the same month. The couple, however, split after three months of official romance.

Previously, Hiddleston dated the British actress Susannah Fielding. He and his ex-girlfriend Susannah first introduced to each other during the set of the BBC show Wallander in 2008. The couple split in 2011 when Hiddleston made the decision to focus entirely on his career.

Following their split, in an interview with The Daily Mail, Hiddleston revealed,

"Acting just demands everything and if you don't give it everything, there will be someone behind you who will."

Hiddleston was also rumored to be dating brunette beauty, Kat Dennings. He met his alleged girlfriend Kat in 2010 while filming Thor. However, they never confirmed their relationship though they were spotted at several public places getting cozy.

Hiddleston was also dragged into allegations that he might be in a relationship with Jessica Chastain in 2013. The actress denied the rumor, although, an insider told Dailymail:

“Tom is taken with Jess and it's serious. Before Christmas, she visited Britain to stay with him and meet all his family for the first time.”

Hiddleston was also rumored to be dating Jane Arthy. The allegedly couple sparked their dating rumor after they were seen together at the 2013 Wimbledon finals. But they have never confirmed their love affair. Another actress to make in this list is actress Elizabeth Olsen. Though, they were spotted out many times together in the year 2015, the Avengers: Age of Ultron actress said that the speculation was totally fake. She stated in an interview with ENews, clarifying the rumor telling,

"I mean, we definitely are friends and we've known each other for about four years. And we happened to be at a restaurant at a wrong time having dinner,"

According to some online sources, there were rumors of him hooking up with former Miss World Priyanka Chopra and Lara Pulver but these are just all hoax.

As of January 2018, Tom Hiddleston has an estimated net worth of around $20 million, according to Celebrity Net Worth. The actor pulls out of buying the comedian Michael Mclntyre’s $5.21 million (£4m) which approx $5,675,200, after a dispute over furniture being included in their deal.

As per some online sources, that Hiddleston’s dates with Tylor Swift cost over $59k in just first few weeks of their public romance.

Movies Collection and Salary per films

Hiddleston is an avid car lover, he has a collection of several cars and some of them are enlisted below;