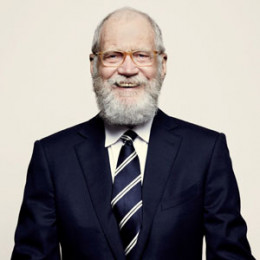 David Letterman was born  David Michael Letterman on 12 April 1947. to Harry Joseph Letterman, a florist and Dorothy Marie Mengering, a church secretary in Indianapolis. His father died of heart attack at the age of 57.

Letterman went to Broad Ripple High School whereas graduated from Ball State University in Muncie, Indiana. While in University he became the member of Sigma Chi Fraternity

David began his broadcasting career at the college’s student run radio station-WBST, now a part of Indiana Public Radio as an announcer and newscaster.

He then started writing material for sitcoms like Good Times in 1975. Later he made his appearance on The Tonight Show with Johny Carson which became his breakthrough. He soon became Carson’s regular guest host in 1978.

David is the founder of an Award winning company Worldwide Pants. The company has produced a successful comedy show such as Everybody Loves Raymond and The Late Late Show with Craig Ferguson. His shows have gained him 12 Emmy Awards with 67 times nominations.

Regina Lasko is the current wife of the 71-year-old TV host David Letterman. The duo started dating in 1986. They welcomed their son Harry Joseph Letterman in 2003. The couple finally tied the knot on March 19, 2009. The announcement was made during the taping of Letterman’s show.

Happy Father’s Day to all the dads out there.

Previously David was in a relationship with his longtime girlfriend, Michelle Cook. They held their marriage ceremony in Muncie, Indiana on July 2; 1968.

Their divorce was finalized in 1977. After that, he had an affair with the head writer and producer of Late Night, Merrill Markoe in 1978. They eventually broke up in 1988.

Letterman survived the quintuple heart bypass surgery on 14 January 2000. He also suffered from tinnitus, a symptom of hearing loss which he revealed on the Late Show in 1996.

He lives lavishly on his 108-acre estate in North Salem, New York along with his family. He was ranked No.17 on the Forbes list of richest men in the entertainment industry.

He has accumulated an estimated net worth of $400 million with an annual salary of $ 20 million.

Michelle Cook is the ex-wife of David Letterman. The duo married in 1968 and after seven years of relationship, they divorced in1977.

Regina Laso is the current wife of David Letterman. The couple married in the year 2009 and are still together.

Harry Joseph Letterman is the only son of David Letterman and his wife Regina Lasko. He was born in 2003.