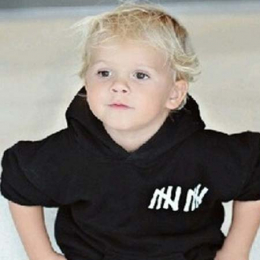 Tydus Talbott is a YouTube and Instagram star who became famous after impersonating famous YouTuber "Jake Paul" in one of the videos. The young social media celebrity has a huge fan following and now frequently collaborates with Jake Paul for videos on Internet.

Tydus Talbott who turned five this May is a social media celebrity who shares a special relationship with mega YouTube celebrity Jake Paul.

Guys my new song “Ice Cream” is out now! Download it and check it out on my YouTube channel! Link in bio! Comment “Ice Cream” letter by letter for a shoutout!!

In September 2017, Tydus was featured in a video titled 3 Year Old JAKE PAUL!! (RARE FOOTAGE) in which he acted like Jake Paul.

Tydus who was modest YouTuber at that time who got overnight success with this video as it got over 9 million views. Among many viewers, the YouTuber Jake Paul was one among them and invited him and his family for collaboration in a video. The collaborated video became a success with over 36million views and that started a whole new chapter in Tydus life.

Tydus became an internet celebrity as he started doing more videos with Paul and started developing a special bond with him. Jake made Tydus an honorary member of the Team 10 family and brought him on his fan tour.

What is Tydus Talbott Net Worth?

Tydus Talbott might be a toddler but is already a millionaire as his net worth is around $877,000- $1million. He amassed this attractive net worth mostly through his two Instagram page.

What do you think I’m thinkin about?

Tydus became an internet celebrity through his parents' YouTube channel Trav and Cor which has over 2.9 subscribers and earns $147.7k-$2.4million annually. Also, his family owns a hotel in Lake Tahoe, at the border of California and Nevada.

Tydus Talbott was born on May 24, 2014, in Santa Cruz, California to Travis Talbott and Corey Struve Talbott. Tydus currently lives in the upper Westside of Santa Cruz with his younger sister named Ryatt Talbott.

My family just posted a new video! Go follow them @travandcor @travistalbott @corey_talbott @ryatttalbott and comment on their last pictures for a shout out!

Tydus gained recognition when his parents uploaded a snowboarding video of him at age one. The video went viral and Travis and Corey started doing family vlog videos which include their kids Tydus and Ryatt.

The family channel created a fan following with videos such as Tydus wears a blazer and pretends to be a businessman and one where he's left home alone with his father, but their fan following skyrocketed with the famous Jake Paul video.

Tydus may be a celebrity and millionaire but his parents are really serious about his education. Tydus attends preschool twice a week right now, and other times home-schooled by his college graduate parents.