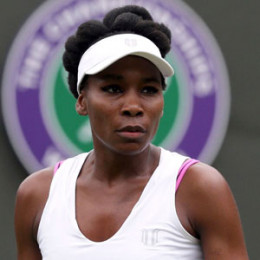 Venus Williams is an American Professional tennis player. She is one of the successful players who won the four Olympics Gold in both singles and doubles. She is currently ranked number 9 in the WTA rankings.

Venus Ebony Starr Williams, known simply as Venus Williams was born on June 17, 1980, in Lynwood, California. She is one of the five children of Richard and Oracene Williams. Her father Richard is a former sharecropper from Louisiana. Her sister Serena is also a skilful tennis player.

Williams earned the degree in fashion from the Art Institute of Fort Lauderdale. She also got a Bachelor of Science degree in Business Administration from Indiana University East.

When she was seven her talent was identified by a pro local tennis player Tony Chesta. There after the family moved to West Palm Beach, Florida so that Venus and Serena could attend the tennis academy of Rick Macci.

His father Richard wanted his daughters to grow normally so told the coach to let them be kids and allow them to be little girls.

When Venus was 11, Richard stopped sending his daughters to national junior tennis tournament as he wanted them to focus on their studies another reason being, he heard other player's parents demotivating the sisters during tournaments. At that point Venus had a streak of 63-0 on the U.S Tennis Association junior tour. She was even No.1 in the under 12 players in Southern California.

Venus was introduced to tennis by her father in Los Angeles on public courts. She began her professional career in 1994 when she was only 14. She then played in a series of matches. She reached the US Open singles final on her first attempt in 1978.

Williams won 49 tournaments worldwide including seven grand slams, five at Wimbledon and the two US titles. In 2000 she won the Olympic singles gold medal as well as three doubles gold medals. She played in record 73 grand slams, in early 2017 after reaching the finals of the Australian Open for the first time she set the Open Era record of highest final appearances in Grand Slam finals in a span of 20 years,  her first grand slam final at being US Open in 1997.

Venus is World no.1 in singles on three separate occasions, she first became the world no. 1 on February 25, 2002. Currently, she is ranked no. 9. She is still one of the best tennis players in the world who redefined women’s strength in the sports field.

William is currently dating model Elio Pis. The duo met while Elio was modelling for his fashion line called EleVen.
Hank Kuehne is the ex-boyfriend of Venus. Kuehne is a pro golfer. The duo split up after several years of dating.

Venus is one of the highest paid tennis players. She also ranked 8th on the Forbes' highest earning female athlete with a salary of $11.5 million. With such impressive salary, she has managed to make her estimated net worth $75 million.

She along with her sister owns a small share in the Miami Dolphins.