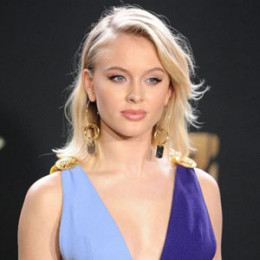 Swedish singer, Zara Larsson rose to stardom after releasing her single, Lush Life. She won the second season of the talent show, Talang at an early age of 10. Her first #1 single is Symphony that peaked at the top of the UK Singles Chart.

Larsson possesses the huge net worth of $10 million at present. She has successfully earned the net worth at an early age. She has released many hit songs in her career.

Born on December 16, 1997, Zara Marie Larsson is the daughter of Agnetha Larsson and Anders Larsson. She was born at Karolinska University in Solna, Stockholm County, Sweden. She is Swedish belonging to Caucasian ethnicity.

Larsson said that she was born dead due to a lack of oxygen from the nuchal cord, in an interview with Svenska Dagbladet. She has a younger sister named Hanna who is also a singer and a member of the band Hanna & Andrea.

Larsson was accepted to the Adolf Fredrik’s Music School in early 2015, but rejected to study, as she did not want to sing in a choir.

At the age of 10, Larsson participated in the second season of the Swedish version of Got Talent, Talang. She won the season and received 500,000 kronor ($61,480 approx.) as the prize money. She sang Celine Dion’s hit single, My Heart Will Go On in the finale of the season.

Larsson signed a contract with TEN Music Group in 2012. She released her debut EP Introducing on January 21, 2013. The EP was leaked on December 9, 2012, through a preview of her single titled Uncover on YouTube. Her single, Uncover was released as the lead single of the album.

The song (Uncover) peaked at #1 on both the Sverigetopplistan and DigiListan charts. Also, it reached #1 in Norway and peaked at #3 in Denmark. The song was certified platinum by Universal Music Sweden by 25 February 2013. She received a triple platinum award for her single, Introducing at Sommarkrysset in Gröna Lund, in July of the year.

Larsson released her first studio album 1 on October 1, 2014, under the label of TEN Music Group. The album is certified platinum in Sweden.

Larsson released her single, Lush Life from her upcoming album (So Good), on June 5, 2015. The song was certified four times platinum in Sweden. The song also peaked top five in several countries including Australia, Germany, Ireland, and the UK.

Larsson released her single, Never Forget You on July 22, 2015. She collaborated with British singer MNEK on the song. The song peaked #1 in Sweden, #3 in Australia and #5 in the UK. The single was certified platinum in Sweden.

Larsson featured in Tinie Tempah’s song, Girls Like that released in February 2016. Also, she featured in the official song of UEFA Euro 2016, This One’s for You by David Guetta.

On October 22, 2016, Larsson was named one of Time Magazine's “30 Most Influential Teens of 2016,” following her third single Ain’t My Fault on 1st September. Her fourth single, I Would Like from her upcoming album peaked at #2 in the UK and #4 in Sweden.

Larsson released her single, So Good on January 27, 2017. The song was featured by American rapper, Ty Dolla $ign. She officially released her second studio album, So Good on March 17, 2017. The album also features collaborations with WizKid and Clean Bandit. Also, it contains one of her hit songs, Symphony that peaked at the top of the UK Singles Chart and became her first #1 on the chart.

Larsson performed alongside American artist, John Legend on December 11, 2017, at Nobel Peace Prize Concert. She was named Forbes’ 30 Under 30 Europe in January 2018.

Zara Larsson’s net worth is $10 million at present. She stands the height of 1.6 meters (5 feet 4 inches). The young, talented singer has entertained her fans by her amazing voice.

Zara Larsson resides in Solna, Sweden with her family. She cites herself as the big fan of Beyoncé and models herself an activist after the singer. She identifies herself as a feminist. She loves traveling and listening to music.

Larsson is unmarried and has no children. She has been in a relationship with British model Brian Whittaker since 2017. The pair is dating at present and shared many pictures on social media. They are having a good bonding as seen on social networking sites.