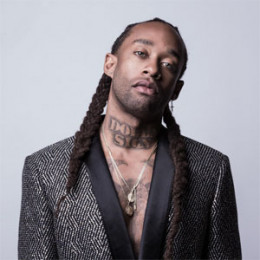 Tyrone William Griffin Jr, an American singer, record producer, and a songwriter is popularly known by the stage name, Ty Dolla Sign. He debuted in the music industry from 2007. The award-winning singer has multiple gold and platinum-certified songs. As of now, he is dating the gorgeous Fifth Harmony band member, Lauren Jauregui.

Tyrone William Griffin Jr, an American singer, record producer, and a songwriter is popularly known by the stage name, Ty Dolla Sign. He debuted in the music industry from 2007. The award-winning singer has multiple gold and platinum-certified songs. As of now, he is dating the gorgeous Fifth Harmony band member, Lauren Jauregui.

Personal Life: Who's he Dating Recently?

As of 2019, Tyrone William aka Ty Dolla Sign is dating the Fifth Harmony member, Lauren Jauregui. The couple got together after he featured in one of the songs of the band in 2016.

Tyrone and his sweetheart were close right from the very beginning but hid their relationship from the public and media. Later on, they began to appear in many of the events together.

The lovers started posting pictures together with kissing emoji which proved they were romantically linked. Tyrone and his darling occasionally share the moment they've spent together on socials. Yet, the lovey-dovey feeling for one another is the same as three years back.

Back on 15 February 2019 $ign's girlfriend Lauren took a cozy picture of herself with him captioning, "Happy Valentine's Day to you baby Love". It seems like, they knew each other from childhood.

Before dating Jauregui, he was in a relationship with a singer, actress, and reality TV star, Alycia Bella. They announced their relationship to the world via their social media. They were happy together but eventually separated. And after sometimes of their separation, she tweeted that she was being cheated by her ex upon the member of the Fifth Harmony which later deleted the tweet.

Apart from this, in 2016, he was caught kissing with an American reality TV personality, Kylie Jenner after she parted from her ex-boyfriend, Tyga. He also has a daughter named, Jailynn from his previous relationship.

How Rich Is Ty Dolla $ign?

One of the popular singers of America, Sign earned a good amount of income from his career. As of now, Sign has an estimated net worth of $1.5 million.

One of his upcoming show is at Santander Arena, and the tickets cost around $34.75 to $125. He owns a luxurious red convertible car.

At the initial phase of Sign’s career, he along with his mate Kory signed a record deal with Venus Brown and Buddha Brown Entertainment and released a mixtape called, Raw & Bangin Mixtape Vol2 in 2007.  After that in the studio album by Sa-Ra Creative Partners and Black Milk, the duo gave a guest appearance. From this, his career started with the release of his first mixtape.

Later on, both of them also sang songs including ‘’U’’ by Popular Demand Recording. By 2010, the pair separated due to some disputes so, collaborated with the rapper YG. His journey to fame began after being featured in the YGTy’s hit song, Toot It and Boot It and his second mixtape, The Real 4Fingaz.

Moreover, in 2011, he became affiliated with Pu$haz Ink, the group of YG. During the same year, he released his first solo song, All-Star featuring Joe Moses and Fuego as a producer. After that, he also released his song, My Canada featuring Young Jeezy which was ranked in the top 50 songs by Complex in 2012.

After that, he co-founded a production team along with his music producer mate, G Casso and Chordz 3D and named it as D.R.U.G.S and also worked with other producers like DJ Mustard, DJ Dahi, Fuego, Nate 3D, Buddah Shampoo and others. In the same year, he also released his mixtape named, House of the Hill.

By 2012, he signed a contract with Atlantic Records and released his first solo mixtape, Beach House. In the same year, he also signed a deal with Taylor Gang Record, a record by Wiz Khalifa. Moreover, a year later, in 2013, his sequel mixtape Beach House 2 released which featured Too $hort, Juicy J, Kirko Bangz, Wiz Khalifa.

In mid-2013, he along with Khalifa and A$AP Rocky participated on the concert tour for the Influence of Music 2. Apart from this, in September 2013, he debuted an EP after the release of his single, Paranoid that became so popular and was certified platinum by RIAA (Recording Industry Association of America).

After that, he again gave his second single in EP titled Or Nah and released major label project Beach House EP with the guest appearance of Khalifa, Twista, Casey Veggies, Jay Rock, French Montana, Fredo Santana, and others.

Furthermore, in 2014, he released his mixtape, Sign Language and after that also appeared on the track of Play No Games in Tyga and Chris Brown’s Fan of a Fan: The Album. In the same year, he also worked with Rihanna on a track of her album.

Featuring TeeCee4800, Joe Moses and him, he released his debut album, Free TC in May 2015 that gained much of the appreciation as was sold over 22000 copies in the US in the very first week. Some months later he again released his second album, Blase featuring Rae Sremmurd, rapper Future, and others.

In 2016, he featured in the song of Fifth Harmony for which he won an American Music Award. The song was even ranked number 4 on the Billboard Hot 100. In the same year, he released his song, Sucker for Pain collaborating with X Ambassadors, Logic, Imagine Dragons, Lil Wayne and Khalifa.

Moreover, in 2017 he released his lead single Love U better featuring The-Dream and Wayne and the second one was released in September named, So Am I. In the same year, he released his third album Beach House 3.

For his work, he was nominated for numerous prestigious awards and won some of them including Teen Choice Award, MTV Video Music Award, iHeartRadio Music Award and so on.

Born as Tyrone William Griffin Jr. on 13th April 1985 in South Los Angeles, California is an American and belongs to African American ethnicity. He is the son of Tyrone Griffin Sr. who had any involvement in the band, Lakeside from which he got the chance to meet the bands like Earth Wind & Fire and Prince. Dolla Sign grew up along with his two brothers named, Big TC and Angel Gold.

Right from an early age, he was interested in music so he learned to play drums, keyboards, bass guitars, MPC and others. When he was a teenager, he became a gang member of the street gang of LA named, Blood whereas, his brother was in another African American gang, Crip.

On 1st February 2005, Jailynn Griffin was born to Ty Dolla Sign and his ex-girlfriend. The name of her mother is still hidden. Jailynn is at the age of 12 and is a huge fan of Fifth Harmony.