Home Article 49 Years American Businessman Daymond John Has Two Children; Who Is He Married Or Dating?

49 Years American Businessman Daymond John Has Two Children; Who Is He Married Or Dating? 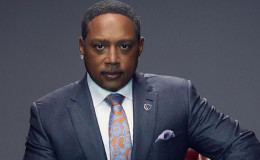 It is said that money can’t buy love and content life. It is true in many of the cases as chasing after money makes one forget about the happiness of a family.

Daymond John is an American businessman who is a perfect example of it. He also saw the downfall of his married life while following his career for wealth. He once had everything but his growing business and wealth took away his family from him or rather took him away from his family.

Let's take a look at his personal life and find out about his current relationship status along with his net worth and past affairs.

After parting ways with his mysterious wife, the American businessman, Daymond John decided to move on and started dating Heather Taras.

Following a long relationship with her, Daymond finally gathered enough guts and ask her to marry him in September 2016. The business tycoon got engaged in September 2016 on the set of Shark Tank.

While talking to US magazine on 23 September 2016, Daymond told that he was pretty nervous to propose his girlfriend and was planning the event for three long years. The once-absentee-husband also told that he prepared a 9.5-carat emerald-cut diamond ring for his fiancée.

Also, See: Get To Know About Famous Shark Tank Investor Robert Herjavec' Ex-Wife Diane Plese: Has She Moved On With Someone Post Her Divorce?

Heather, on the other hand, accepted his proposal pretty quickly without wasting a second. Daymond is looking forward to a more than fulfilled life with her and their daughter. His posts on Instagram which leads us to believe he is making up for his past.

A year after the engagement, he attended the Gersh Emmy Party with his soon to be a wife, Heather. The event was hosted by Tequila Don Julio 1942 in Los Angeles, California on 15th September 2017. The pair recently got married and Daymond shared his wedding photos on Instagram.

The American businessman is set to forget his past and relish his moment with his wife. They are taking things at a slow pace without rushing into things in their relationship.

Having learned from his first marriage and wisened by his past mistakes, it seems Daymond is leaving no stones unturned to make this relationship with his current wife work.

You May Like: Chris Potoski, a successful businessman is a loving husband and caring father. Know more about his career

No doubt, the happily married couple is going on so strong in their family life. They celebrated New Year 2019 along with a big start in their family.

The lovely pair married on the same day!

John misses not even a single chance to adore his lovely wife via social media.

Daymond John Past Relationship And Children

When Daymond was just starting out in his business, he married a woman whose identity remains a mystery to date. The now estranged couple has two daughters, Yasmeen and Destiny.

While he was in the relationship with her, he got caught in the flow of the fortune. He started becoming an absentee husband and father. His busy schedule created a complication in their marriage.

His wife and kids mostly saw him on TV rather than in person. The American businessman got caught trying to shape his career and spent most of his time partying with his friends, celebrities, and rappers.

Even though his wife spoke with the other upper-class mothers, they merely talked with her and showed sarcasm towards Daymond and described him as 'the one who robs by making baggy jeans.'

Things got worse to a point where even when Daymond's younger daughter fell from a bike, and he consoled her over the phone.

Eventually, they split up and his wife took everything including his two daughters. Daymond had everything dear to him gone in a blink because he was not there for his family when they needed him. But he seems to have learned his lesson, at least that's what his Instagram post makes us believe.

Stop chasing money. - The more you chase it, the further away it gets from you. You have to go after your DREAMS, and the success you desire. Once you start feeding your passion, the money will come.

In talks with CNBC about his married life, Daymond said that his wife left him saying he was no longer the person she fell in love with. But Damond recovered from the heartbreak of losing his wife and daughters, who still look up to him and soldiered on.