Comedian Andy Richter is one genuine down to earth guy who was long married to Sarah Thyre and blessed with two beautiful children. It was all in the past as he recently split up with his wife with a divorce. Their 25 years of marriage is now history as they look towards their future without each other.

Conan O'Brien sidekick, Andy Richter played out his career in some hit movies, late night shows, and some TV series. However, his personal life with his wife didn't turn out to be great. Honestly, we would expect a marriage of over 20 years to be stable all the way to the end. What actually happened to their relationship? Let's have a look at it.

Andy Richter: Being Married For Over Two Decades With Sarah Thyre Concluded With A Divorce

Famous comedian, Andy Richter was married to an American actress Sarah Thyre since 1994 and filed a divorce in 2019. After being together with his wife for 27 years, he is now a single divorced man.

The star revealed the filing of the divorce via their social media. Check out this tweet:

Months are the announcement, finally, the divorce was finalized in August 2019. So, as of now, Ritcher is single.

Richter dated Sarah for about two years before finally tying the knot in 1994. The pair first wedded in 1991 during the Los Angeles production of The Real Life Brady Bunch, a spoof of the 70s sitcom.

Famous comedian Richter was always sweet to his wife and agreed on whatever she decides. Maybe that was the reason for their longlasting marriage. Their beautiful relationship is blessed with two children, William Oscar Richter born in 2001, and Mercy Josephine Richter born in 2007. Everything went well until 2019 when they took their fans by surprise with the divorce announcement in the social media.

“It is with sadness that Sarah and I announce that we have separated and have begun divorce proceedings,” the Richter, 52, wrote on Twitter on Saturday, April 13. “We are extremely proud of the life we’ve built together and shared with so many friends over the years, and even though our marriage has reached its completion we will always maintain a loving friendship and parenting partnership.”

Known for the Conan show, Richter is a man with a great sense of humor, but currently struggling with his personal life. Furthermore, he pointed his fans for their support and added in his other post,

“The amount of love and support that you all have shown is truly a gift and so so meaningful to me. I feel very loved. That you.”

Star from 'Strangers With Candy' Sarah Thyre responded and tweeted,

“After careful consideration, @AndyRichter and I have decided to divorce. We’ve shared a wonderful 27+ years and have 2 fabulous kids whom we love and will continue to parent together. Thanks to our friends and family for their support. Looking forward to the next chapter…”

All his fans can do is just wish him and his ex-wife a happy life ahead after separating from a long 25 years old relationship. It comes as a surprise that the marriage has been successful for so long but had to end up with the divorce.

Man of sense of humor, Andy Richter kicked off his journey to the industry in 1993 with a biography, comedy, and thriller genre The Positively True Adventures of the Alleged Texas Cheerleader-Murdering Mom while Sarah Thyre has had a short career in the industry with her major role being in the Strangers With Candy. 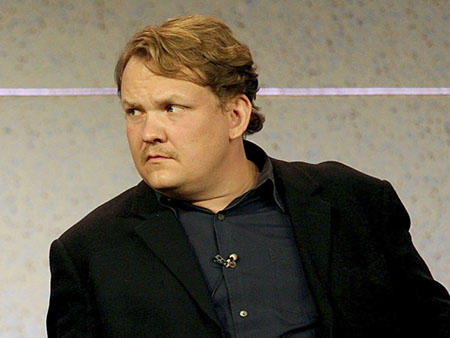 He began to make his name, and in 2001 he appeared as Eugene Wilson in Dr. Dolittle 2 as which became a box office hit collecting $111 million. Likewise, his even bigger hit came in 2003 portraying the role of Morris in the movie Elf alongside stars like Will Ferrel and James Caan.

You May Like: Renowned Comedian Joe Wilkinson and Petra Exton secretly got married and are happy to be a husband and wife

Also famous for voice acting, Richter is a part of Madagascar franchise giving sound to the character Mort. This has been his best movie to date, nonetheless, he is more popular from his sidekick role in the Conan O'Brien each program: Late night, The Tonight Show on NBC, and Conan on TBS. 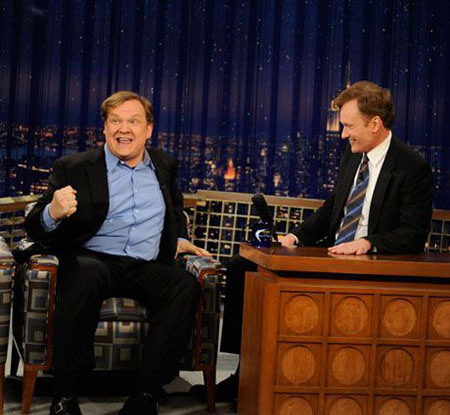 Star comedian, Richter's life revolves around fame and rumors. There was a strong rumor that he is gay, however, he dismissed the rumors clarifying he's straight and loves his beautiful ex-wife. He went down to Twitter to shut the mouths of people blabbering. Check it out

Oh yeah? Well if I'm so gay like you say, then why do I have to think about my wife when I have sex with dudes, hmmm?

Well, these rumors were growing because Richter's father was gay. Fans don't wait for anything to speculate things in the media, do they? 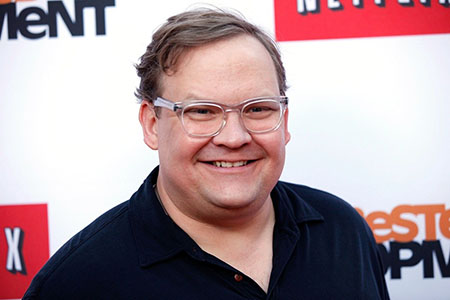 You can find more information about your favorite celebrities on our website!!! marriedwiki.com/article