Home Article American Singer Kirstin Maldonado Is In A Relationship With Partner Jeremy Michael Lewis; Details Of Their Wedding Plans And Affairs

American Singer Kirstin Maldonado Is In A Relationship With Partner Jeremy Michael Lewis; Details Of Their Wedding Plans And Affairs 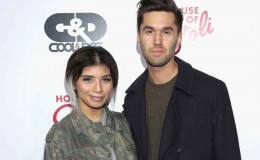 Falling in love is easy but the obstacle one has to face that comes after being in love is what truly tests the bond of the lovers. And especially in this era of competition and the immense pressure of work, to balance work and love together is no less than a herculean feat.

Though for Kirstin Maldonado, we are yet to see if she can pull it off or not. Kirstin is a singer and a pop icon and her love life have been interrupted by her professional life as she is finding it hard to take the most important decision of her life.

Kirstin Maldonado Is In A Relationship With Partner Jeremy Michael Lewis:

Kirsten Maldonado is a singer and she is in a long-term relationship with now fiance, Jeremy Michael Lewis. He is also a singer and after almost 3 years of dating, he proposed Lewis on May 29, 2016, in Paris where Pentatonix had a performance a day after the proposal.

You May Also Like; 40-Years Went And Plenty More To Go! How It All Started For The Meryl Streep And Don Gummer?

The couple met in August 2013 and finally took the plunge after a beautiful proposal by Jeremy in front of the Eiffel tower. Jeremy saw an opportunity and took advantage of the fact that they were in Paris, the city of love.

He properly planned it with even a photographer at the ready to forever trap Kirstin's reaction during the surprise proposal.

After the engagement, Kirstin made the announcement to the rest of the world via her Instagram accounts with a very sweet picture of both of them clearly in love.

The surprise on Kirstin's face clearly shows that the surprise worked as a charm and Jeremy succeeded with his plan. The couple has been engaged for quite some time now so the couple is anxious to get married and with recent rumors of Kristin being pregnant with the couple’s child further added more fuel to the rumor.

Know more; Who Is Antonietta Collins Married To? Know In Detail About Her Current Affairs And Relationship

As for the pregnancy rumors, she was spotted with a baby bulge and was seen giving a toast in a restaurant while drinking water. We know that pregnant women aren’t supposed to drink alcohol so it has led us to believe that the rumor may somehow be true.

The couple planned to get married soon but their marriage plan of 2017 was postponed for some undisclosed reasons. Both seemed too focused on their rising career and with both being as busy as they seem and are having a hard time getting everything done for the wedding.

"Kristin and Jeremy have postponed their wedding. It was scheduled for December but they’ve pushed it off."

"Invites did not go out yet. They are Staying together to work on separate issues"

And to many people's surprise, in an interview with People magazine, Kirstin said she had never thought of getting married in her life. She said she is not the type of girl who has a lifelong dream of a perfect wedding, rather the opposite. she said;

“I never planned out my wedding. My mom and dad weren’t together, so I never thought I would get married. I thought I would move to New York and be on Broadway; that was my goal. I was very work-focused. But I found love!”

Now, although in immense workload pressure and busy schedules, the couple has decided on a fall wedding and with a little help they plan to finally tie the knot and exchange vows.

“It’s coming up very quickly. My fiancé and I are both, respectively, busy with our work, and we’ve had a longer engagement, so it’s just crazy that it’s happening soon. I’m excited. At first, I had nothing planned out, which is why I wanted a wedding planner — because I had no idea about anything. I also like a bunch of different things and need someone to reel me in. I need someone to focus me.”

And though she hasn't revealed anything about the wedding with specific details, she did talk about the basics of her wedding. She said:

“I have a dress. We have a location. We have the bridesmaid dresses. All the decisions are starting to come. We’re able to see them visually — so now I’m able to get a better sense of what is happening. Until you nail the dress or the colors, you’re like, ‘What’s happening?'”

The couple seems eager to tie the knot and so are their fans who cannot seem to hold their excitement in this matter. We hope only the best for the pair and we hope their wedding is as beautiful as the couple themselves.

You May Also Like: Is Pentatonix's Avi Kaplan Married? Know about his Family, and Career

Pentatonix singer and her fiance called off their marriage nearly a year and a half after getting engaged. Is the pair split apart? Have they broken up secretly?

Well, the current situation reflects to be the same but the pair is yet to answer regarding the very issue.

Some Riveting Facts of Kirstin Maldonado