Home Article Who Is Antonietta Collins Married To? Know In Detail About Her Current Affairs And Relationship

Who Is Antonietta Collins Married To? Know In Detail About Her Current Affairs And Relationship 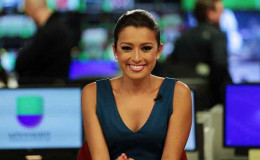 Mexican-born American woman Antonietta Collins is a sports commentator. Currently, she works as a news anchor for a daily sports news program, Sports Center, under the U.S.-based sports channel, ESPN.

If you are willing to dig into the personal life of the gorgeous anchor, Collins, you just stepped into the right place.

Lately, along with the growth in the use of social media, television personalities started gaining celebrity statuses. Though she worked at other channels earlier, Antonietta Collins became famous only after working at ESPN channel.

Collins is too tight-lipped regarding her private life. She does not share whether she is married or if she is in a relationship. One of the most gorgeous faces in the showbiz, Collins, always keeps her private life a mystery to the public.

According to some references, Collins is unmarried as of 2018. There is not much gossip of her being in a romantic relationship with any boyfriend.

Nevertheless, she is believed to be in a long-term relationship with one of her professors from University of Mount Union, Mark Bergmann. He was the one who instilled in Collins a desire to work in the field of journalism. Due to his influential role, Collins is completely into journalism, especially anchoring, today.

Bergmann is the manager of WRMU 91.1 F.M. of which Collins was once a member. In a blog published on the official website of the University of Mount Union, she explicitly appreciated her professor. She always acknowledges both the university and the professor, Mark, as reasons for her professional success.

However, there is no concrete evidence to prove this rumor. We cannot run after rumors and conclude that the fan-favorite, Collins, is really in love unless she comes out with the truth.

Antonietta Collins holds a Bachelor's degree in media studies. Upon completing her degree, she started her professional career in journalism.

She is the daughter of the world-famous veteran TV reporter Maria Antonieta Collins. Maria is a journalist, best-selling author, and TV host who paved the way for female journalists and she didn't even realize that her daughter Antonietta "Toni" Collins would walk on the same path.

In the beginning, she worked as a reporter for KNVO TV 48. At the same time, she also worked at Fox2 News as a reporter.

Antonietta Collins at her workplace.

Collins joined the globally famous channel ESPN in 2013 and still works there. She is now extremely delighted to get an opportunity to work alongside her idols, great journalists, anchors, and athletes.

She often posts photos of great footballers like Lione Messi, Andres Iniesta, etc. because she is a huge fan of FC Barcelona. Moreover, she enjoys watching and doing commentaries on baseball as well.

There are lots of reasons for us to believe that Collins is going to be working as a sports anchor for a long time into the future.