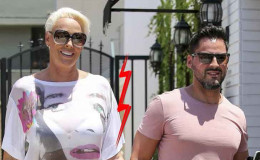 Everyone goes through difficulties in life but strong people move on and do what makes them happy.

Brigitte Nielsen is a Danish model, actress, singer, newspaper columnist, and television personality. She not only appeared in dozens of films and television series but also sang more than a dozen songs.

Some celebrities' real life is vastly different from how they appear on the screen. Even if they are going through a lot of troubles they have to put their life aside and focus on keeping the audience entertained.

If you are desirous to know about Brigitte's personal life, read down below!

Regarding her personal life, Brigitte walked down the aisle with Mattia Dessi on July 8, 2006, in Malta. They are a happily married couple. This couple shares a daughter named Frida Dessi who was born on June 22, 2018.

Brigitte and her current husband, Mattia Dessi during their wedding,
Source: GoodtoKnow

Dessi is a television producer who is famous for his 2005 production, Strange Love, and 2015 production Gitte Talks. Nielsen and Dessi met for the first time on April 12, 2004, at a hotel in Switzerland. At that time, he was working as a waiter.

It is believed that they started dating immediately after their first meeting. Most importantly, their commitment for one another is still as strong as, if not stronger than, when they fell in love.

They waited for 12 years to welcome their first child together. Now, their bonding is stronger and deeper than ever before because they have a daughter in common.

Renowned magazines like People and Hola featured the couple together.

Mattia Dessi, in fact, is Brigitte Nielsen's 5th husband because she had already been through four unsuccessful marriages.

Brigitte was first married to composer Kasper Winding in April 1983, however, they parted their ways a year later in 1984. They share a son named Julian Winding who was born on April 12, 1984. She left both her husband and son to act in Red Sonja.

Brigitte with her second husband Sylvester Stallone during their wedding,
Source: Pinterest

After that, she fell for a football player, Mark Gastineau, and gave birth to a son Killian Marcus Gastineau on December 15, 1989. They met for the first time in a Los Angeles gym in January 1988, however, they never became man and wife.

Brigitte walked down the aisle for the third time in her life with director and writer Sebastian Copeland on September 29, 1990. She could not get along well with Copeland too and they filed for their divorce 2 years later in 1992.

Shortly after her separation from Copeland, Brigitte met Raoul Meyer and got married to him on December 17, 1993. Their marriage lasted for more than a decade before separating in 2005. This former couple shares two sons, Douglas Aaron who was born on April 19, 1993, and Raoul, Jr. who was born on 21 May 21, 1995.

We can only hope that she is gonna end up with her current husband.