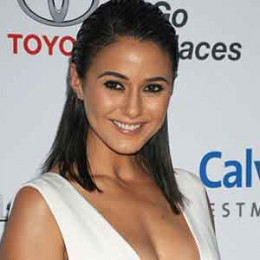 ''My career has been successful, but it's been a grind of hard work.'' The person behind the quote is the most talented and beautiful actress, Emmanuelle Chriqui who is famous for her performance in the TV series, Entourage and the movie, You Don't Mess With Zohan. The actress who started her carer in the entertainment industry at the young age of 10, earned several roles in many hit movies and TV series.

Early Life and Education Of Emmanuelle Chriqui; Her Wiki-Bio

Emmanuelle Chriqui was born Emmanuelle Sophie Anne Chriqui on 10th December 1977 in Montreal, Canada under the birth sign Sagittarius. Chriqui is Canadian as per nationality. She is the daughter of Liliane, an aesthetician, and Albert.

Her mother was born in Casablanca and her father in Albert. Her parents are the immigrants from Morocco.

This is SUCH a #ff This was taken during #Passover when I was 3 years old. My sweet and beloved father doing what is called ‘bebeluya’ a typically Moroccan custom that brings good luck and good wishes.. For all of you celebrating Passover and Easter this weekend, I wish you truly beautiful holidays.. #HappyPassover #HappyEaster #ShabbatShalom ps yes my father looks like Pablo Escobar

Moreover, Chriqui grew up with her two siblings, an older brother Serge and an older sister Laurence in Markham, Ontario. When she was two, she along with her family moved to Toronto, Ontario.

Her mother who died when she was 16 told her that she would be an actress. Later, she took acting classes and then attended Unionville High School.

Emmanuelle Chriqui started her acting career at the age of 10 in a McDonald's commercial. A decade later. Chriqui made here movie and TV series debut as Patty in the movie, The Donor and in the series, Kung Fu: The Legend Continues.

Getting glammed by these two geniuses @danielmartin @davidcolvinhair for a #Tastemakers screening for #ThePassage.. Quick trip to NYC.. but worth it!

As of 2018, Chriqui is working in the upcoming movie, Omphalos and upcoming TV series, The Passage.

Emmanuelle Chriqui is active in the entertainment industry for years from where she earned an impressive net worth and salary. As of 2018, her net worth is accumulated to be $9 million.

Among several movies, here are some of her hit movies with a good box office collection:

Moreover, Chriqui is also receiving a great salary from the TV series. The actress also makes much amount from her endorsement deals and photoshoots. Besides, she is also involved in several charity works.

Emmanuelle Chriqui is yet to get married but is in a romantic relationship with her longtime boyfriend, Gerardo Celasco aka Adrian Bellani. Her boyfriend is a handsome American actor popularly known as the second actor to play the role of Miguel Lopez-Fitzgerald in NBC's series, Passions.

The couple met for the first time with the help of their mutual friend and eventually started dating in 2013. By September 2013, the duo confirmed their relationship. Henceforth, they are inseparable.

Moreover, they spend most of their spare time together. Despite several rumors about their break-up, they are still living a blissful life together. She then dated actor Jeremy Sisto and separated in 2003.

Previously, the actress dated American singer, J.C. Chasez from 2001 to 2002. She then started her relationship with actor Clifton Collins Jr. in 2006 but separated soon in 2007 for undisclosed reasons.

Besides, the beauty is active on social media and earned a great fan following from her amazing posts. As of 2018, her Instagram account has over 400k followers.