Doria Ragland, Meghan Markle's Mother Seen Out For the First Time Since Prince Harry Slammed Markle's Family , Stated Royal Are "the family" She Never Had 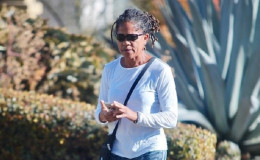 Doria Ragland, Meghan Markle's Mother Seen Out For the First Time Since Prince Harry Slammed Markle's Family, Stated Royal Are "the family" She Never Had

Doria Ragland, the LA native and supportive mother of soon-to-be royal Princess, Meghan Markle stepped out for the first time after Prince Harry accidentally made an offensive comment about Markle's family which stirred quite a controversy in the media.

Amidst the scandal, Doria was spending holiday far away from her daughter and she remained under low profile until this Thursday when she walked out around Los Angeles with her two dogs.

Doria Ragland, Meghan Markle's Mother Seen Out For the First Time Since Prince Harry Slammed Markle's Family, Stated Royal Are "the family" She Never Had

This year's Christmas was grand filled with royal gestures for the gorgeous Meghan as she spent quality time with royal family, sipping tea with Queen Elizabeth and spending the entire holiday with her loving Prince Harry.

She also attended the annual royal gathering, a divine event with all the elite personalities making a great impression. 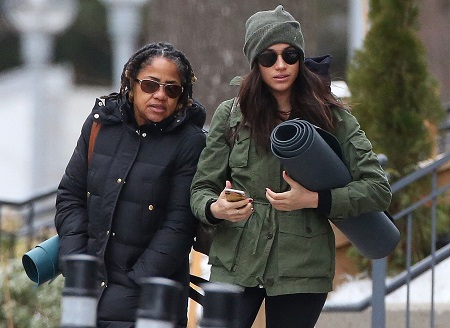 Meghan Markle Steps Out for Post-Christmas Yoga with Her Mom For Yoga
Source: People

When asked about how the event Prince Harry stated,

"She's getting in there and it's the family I suppose that she's never had."

This statement drew attention from many, most specifically of Meghan's half-sister Samantha, who reacted smartly to Prince's  malign comment. In response, she tweeted,

"Actually, she has a large family who were always there with her and for her. Our household was very normal and when dad and Doria divorced, we all made it so it was like she had two houses. No one was estranged, she was just too busy." 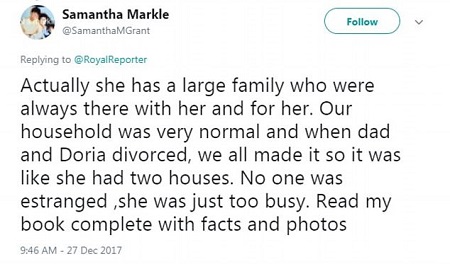 Meghan's half-sister Samantha tweeted about the happy family they have
Source: Twitter

She further added that she's working on her new project asking everyone to read her book complete with facts and photos. She tweeted,

"Excited for my book coming out and wait until you see what our home life was like!"

Meghan's mom, Doria was living under the radar, spending holidays away from her daughter until Thursday when she made her appearance, strolling around LA with her dogs. 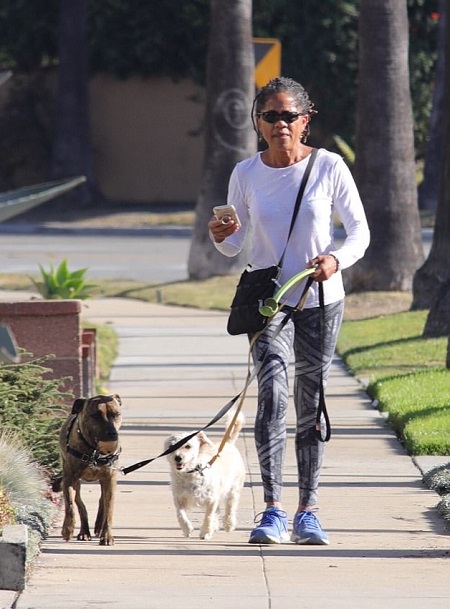 Mother of the bride: Doria Ragland was seen in Los Angeles on Thursday after spending the holiday away from her daughter Meghan Markle
Source: Apex/Mega

She walked down the lane keeping a low profile, rocking a pair of leggings and white long-sleeved shirt, pairing it up with a sunglasses. Doria was married to Thomas for quite a long time but got divorced and went separate ways. Doria and Thomas raised Meghan in LA and supported her to pursue her career in acting.

She's still an LA native and works as a clinical therapist. The mother and father of the bride issued a statement of congratulations to the happy couple and she's spent quality time with son-in-law on numerous occasions. But we don't this Prince Harry's comment will create any cold-war between the in-laws!