Keely Shaye and Pierce Brosnan has been married for more than 15 years now and they are still enjoying like young couples. Let us find out more about them.

The classy James Bond actor Pierce Brosnan married Keely Shaye Smith in 2001. James Bond is known to woo any girl he likes and so did Pierce Brosnan. He persuaded Keely to marry him and the couple is very happy. They have two sons between them.

Pierce was previously married to Cassandra Harris until her tragic demise. It was a very difficult phase for him but he coped with it pretty well. After that incident, he met his current wife Keely and is very happy with her. Let us find out about the couple's relationship.

Pierce and Keely first met while Keely was taking an interview of him in 1994 and the couple started dating afterward.  They tied the knot after seven years of knowing each other in 2001. They got married at Ballintubber Abbey in County Mayo, Ireland.

They tied the knot after seven years of knowing each other in 2001 at Ballintubber Abbey in County Mayo, Ireland. The couple has the best marriage celebration ever as they spend every dime on their wedding. At the time of their marriage, they had one of the most expensive wedding cakes ever.

Their wedding cake was reported to be priced at staggering twenty-five hundred dollars. 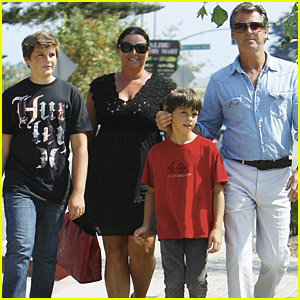 Recently, the couple was spotted spending happy time together on the beach of Hawaii. They were celebrating the New Year  Eve together.

Many people have criticized Keely for her chubby figure but she does not care about that as she was seen flaunting her body in a tight black bathing suit.

Though Brosnan has been cast along with many hot actresses like Halle Berry, Salma Hayek, and Meryl Streep, he still has his eyes on his wife Keely.

Pierce previous marriage was with Cassandra Harris. He started dating her when he left drama school in 1977.

After the tragic demise of his wife Cassandra Harris, Pierce had taken an oath that he will never marry again. He had to take care of their son named Sean as well. At that time around he was cast in a movie in which he had to play the role of a widowed father who had to take care of his son all by himself and Pierce's acting was mindblowing as his role was critically acclaimed.

But after meeting Keely he decided that she can be the one that will fill his heart and the deep hole that has been made after the sad death of his beloved wife.

Well, everyone knows that his decision was absolutely spot on as the couple is together for more than 20 years.