Home Article "Life is too short to say no to a cake", here is list of top 10 most expensive wedding cakes ever

"Life is too short to say no to a cake", here is list of top 10 most expensive wedding cakes ever 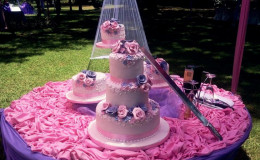 There has been a lot of wild news around the world but a cake being so expensive that it literally costs 50 million dollars, is something to look for. Let us see the list of world's most expensive cake.

We all have celebrated our birthday with our friends and family and cutting the cake is the best part but how about cutting a 75 million dollars cake ever thought of that. Well, we have put together a list of the most expensive cakes around the world.

Most expensive Wedding cakes ever

When the classy bond actor Pierce Brosnan celebrated his wedding with soon to be wife Keely Shaye Smith he didn't content himself with a small cake as he ordered The Little Venice Cake Company to make him the cake that will be the best cake of all time.

The cake cost around 2500 dollars and it was one cake that everyone looked forward to. It was four tier tall and it included an elegant hand-piped fleur-de-lis design around every tier.

It was displayed on a topiary tablecloth which was depicted with orange blossoms, white roses, and stephanotis. Kelly mother also crystallized the flower to give a dew-like ambiance.

The couple went crazy with their wedding as they cut the then most expensive wedding cake ever. The cake cost around 4500 dollars and it was made of chocolate and it was fully vegan.

The cake was made by the company named Choccywoccydoodah of Brighton, London, United Kingdom. It was was four tier tall and it was distributed among 30 guests that were present there at that time.

Kim and Kanye celebrated their love together and they didn't save a dime to shower affection to each other as they married in the most lavish of fashion, the 6700 dollar cake is the biggest example of it.

Their cake was the one to look for as it was majestic and classy at the same time. The cake was 7 tier tall and it weighed a lot as it took three people to carry it. The cake was 7 feet tall, maybe taller than most of their guest in the wedding.

Also, see: Kanye West and Kim Kardashian Married in 2014. Know about their Children and Family.

Kim Kardashian living happily after her third divorce, Know about her relationship and affairs

Kim Kardashian living happily after her divorce, Know about her affairs and dating rumors

Kanye West and Kim Kardashian Married in 2014. Know about their Children and Family.

Michael and Catherine were always in love with each other. The couple broke up before but they got back together and eventually got married.

Their wedding cake was truly a masterpiece as it cost them astonishing 7 thousand dollars.

The cake was six feet tall and they literally had to remove the upper two tiers of the cake as it wasn't going to the door. It was created by Sylvia Weinstock.

Chelsea and Marc celebrated their wedding in the most extravagant way as they cut the 11 thousand dollars Gluten Free cake.

The cake was reportedly gluten free but it didn't look gluten free as it was looking so delicious. The cake measured at around four feet tall and it was 9 tier tall. It weighed around 500 pounds and it was decorated with 1000 flowers which included roses, calla lilies, and orchids.

Kim comes again on this list as she and Kris marriage was on to look for. The wedding had around 400 wedding guest and it was also live telecasted in Television as well.

Their wedding cake cost around 20 thousand dollars and it was absurdly good looking. The cake 8 tier cake was 8 feet tall. It was even taller than Kris Humphries. The cake weighed around 600 pounds and it was one to watch. It was created by the famous cake designer Patrick Hansen.

When the comedian Eddie Murphy married Nicole, he did not give a second thought to the cost of the wedding as the couple had a stunning 25 thousand dollars cake in their wedding.

The cake was fully decorated with flowers and it looked so beautiful. The multi-tiered cake was very expensive at the time when the couple got married on 1993.

Liza and David married in the most lavishing way as possible. The couple spared no expense as their wedding cake cost them a mind-boggling 40 thousand dollars.

The cake was literally too tall for anyone to cut as it was standing at towering 12 feet tall.

It was colored with white and black colors and decorated with red roses all around it. There was also stripes of sterling leaves that appeared all through the cake and it was finished off with purple sugar rose.

We all know how lavishly our beloved President of the United States lives like. Donald Trump is known for his rich lifestyle and he does not shy away from anything as he spent around 1 million dollars for his wedding with Melanie.

Their wedding cake cost them more than 50 thousand dollars.

The cake was standing at five feet high and it was seven tiered. It was decorated with 3 thousand white icing rose and was also filled with Grand Marnier buttercream. It was created by chef Cedric Barbaret.

When the big businessman and celebrities around the world shell out so much money on their wedding then how come a royal couple of United Kingdom be behind all of them.

The royal couple reportedly had the most expensive wedding cake that a man has ever seen in his wedding.

The cake cost around staggering 80 thousand dollars. The cake was made by Fiona Cairns. The cake had seventeen different types of flowers on it.

On the seventh tier, it was English rose, Scottish thistle, Welsh Daffodil, and Irish shamrock. On the sixth tier, it was designed with flowers that showed sweetness and humility.