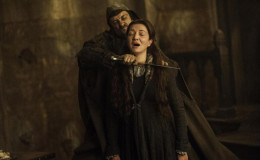 While the flabbergasting ending of Episode 4 of Season 7 Game of Thrones has left us choking ourselves. eagle-eyed viewers of the show have found something more interesting yet freaky!!

Some fans are even saying perhaps it's something that the directors, David Benioff and D.B. Weiss's idea of adaptation from the book written by George R.R. Martin.

So, what is it really? To find out keep reading below.

Last week, when the episode, The Spoils of The War was premiered, most of you only noticed the epic last 5 minutes of the episode showing the war between, Casterly Rock and Daenerys's Army of Dothraki and her Dragon.

However, a user named GrennsGal, a Redditor noticed something freakish in the scene where Arya Stark (Maise Williams) has an encounter with Brienne of Tarth (Gwendoline Christie) when the duo ends up in a friendly combat. 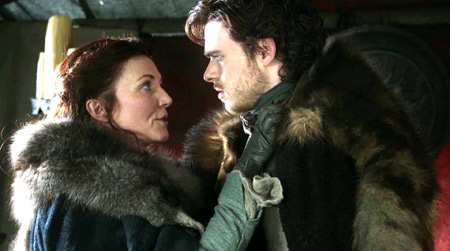 Before the duel, Arya walks towards her protector, Brienne, and states,

"You swore to serve both my mother's daughters"

Right after that, fans believe that a cloaked specter of the late Lady Stark Catelyn can be seen walking in the background who was murdered in season 3's Red Wedding. Don't believe us? See for yourself. 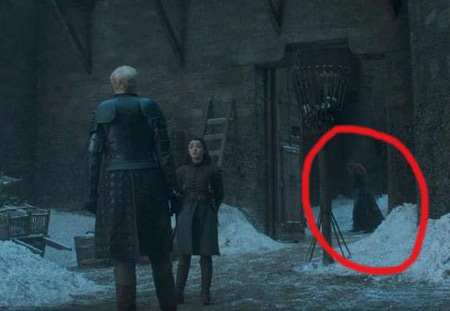 The fans were left devastated when Catelyn was mercilessly slaughtered along with her son Robb (Richard Madden), King of the North beside his wife and her unborn grandchild in that mortifying episode.

In the book, the Lady of Winterfell, Catelyn Stark (Michelle Fairley) returns as the character Lady Stoneheart.

The novel plots the return of Catelyn Stark as an undead version of the character Lady StoneHeart. As The Hound (Rory McCann), Jon Snow(Kit Harrington) and Uncle Benjen( Joseph Mawle) are back, we can't ignore the possibilities of Mother Stark coming back!!!!!!

Along with Catelyn, the return of Sword master Syrio (Yerolemou), Stannis Baratheon (Stephen Dillane), Jojen Reed (Thomas Brodie-Sangster), Hodor(Kristian Nairn) and Ned Stark( Sean Bean) have been speculated by most of the critics.

Game of Thrones airs in the US on HBO every Sunday at the same time in the UK on Sky Atlan2 am at 2am. It is repeated that same evening on both Sky Atlantic and NOW TV.

Well, the battle for the throne is yet to conclude and the anticipations are hiking peaks. Let's wait for the dead to come alive! Winter is HERE.

Who do you think will finally sits on the iron throne, do leave us a comment below!!!! and for more updates follow our page!!!!!!