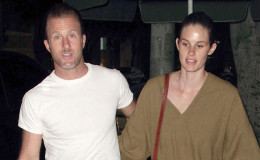 Love cannot be defined by a piece of paper or tied with formalities, rather it is a feeling best expressed with respect, gratitude, and acceptance. Marriage is just a social construct and shouldn't be applied with love.

Scott Caan is a well-known actor who has similar beliefs and is living by it with his girlfriend. His moral values seem to have the ability to commit without marriage and better than the ones that have chosen to follow this social idea.

Scott Caan Relationship with Partner Kacy Byxbee: Are They Getting Married?

Scott Caan is currently in a relationship with girlfriend, Kacy Byxbee and the couple have been together for quite a few years now. Although they keep on the down low about their affair, there are little details about them in the open.

Scott and Kacy met at the sets of Hawaii Five-O and they have been together and strong since then and recently, they also became first-time parents.

Discover: 1.75 m Tall 'Edgemont' Actress Grace Park Is In A Married Relation With Phil Kim, And She Has A Child

The pair refrained from sharing the news with the world as they are really private about their personal life and it also could be because they are still unmarried.

News broke of the couple’s pregnancy back in May of this year, after a source gave a tip to Life & Style stating: “Kacy’s friend posted a photo of her very pregnant belly with the hashtag #babycaan on Instagram,” and lighting the fire.

Scott said in an interview that he is committed to Kacy but is gonna stay away from marriage as he doesn't believe a piece of paper is required to prove his commitment and the feelings seem mutual with Kacy.

“It’s one thing to have a girlfriend, it’s one thing to be married, it’s another thing to say 'Let’s have this child together. It no longer is about your feelings. We’re going to commit to each other. I don’t even think I’ll ever be married. But having a kid with this woman I’m with is stronger than any piece of paper or ring I can get.”

It was reported that Scott was over-the-moon when he discovered Kacy was expecting a child of his. He celebrated with the cheers from his crew members and even took a break from production to be with Kacy at the time of the birth.

You May Like: Michelle Borth, 39 still Single or Dating Someone? Accused Of Having A Plastic Surgery

One person who is also said to be delighted by the news is his father James Caan. The 78-year-old Godfather star can hardly wait to become a grandfather.

According to E! News, they welcomed a little girl, Josie James, on July 9 2014. Kacy also had a baby shower within L.A. over the weekend and she was feted by friends and family.

Given that both Scott and Kacy are extremely private, there is little to no chance that they will bring the little angel in the limelight and the world will have to wait to meet this bundle of joy. Yet, given their stellar genes, it won't be a wrong assumption that little Josie James is a beauty.

Well, we all are obvious about the fact that Caan his girlfriend Byxbee are still so much in love. Their fans have the same question in their mind, "Will they get married anytime soon?"

The lovebirds hasn't given any clue regarding the big day so, let's wait and watch what's the couple is upto.

Scott Caan Past Affairs And Relationships

Scott Caan has remained tight-lipped about his personal life and very few details are known about his past affairs. His first known relationship is with Izabella Miko, a Polish actress, dancer, producer, and environmental activist.

She is famous for starring in the musical comedy-drama, Coyote Ugly and music videos like "Mr. Brightside" and "Miss Atomic Bomb" by The Killers.

Later he was spotted with Kimberly Stewart at the "Eraser" Los Angeles Premiere Jun 11, 1996, at the Mann's Chinese Theater, Hollywood, California. Furthermore, they were again seen together at the "Dallas 362" Los Angeles Premiere. Other than these, there are no records of any other relationship of Scott.

Being as good looking as Scott, it is hard to believe that he has had so few affairs but the reason behind is said to be his career and his various talents that take up most of his time.

Multi-talented, Cann has pursued his career in photography as well as is in Music. He even had formed a Hip Hop group 'The Whooliganz' with a friend 'The Alchemist' and even signed a contract with the World-renowned Tommy Boy Records.

Scott also knows Brazilian Jiu-Jitsu and even earned a brown belt in it while practicing with MMA champion Egan Inoue. Caan also loves surfing and has been surfing all his life and the actor also teaches kids to surf in free time.

Recommended: Lauren German; why is she Rumored to be a Lesbian? Is she Dating someone? Find out here

He also helps Kids with Special needs to swim through the organization's Life Rolls On, Surfer's Healing, and ThERAsurf.

These things seem to have kept Scott occupied for the most of the time but its good to see that he finally found the girl of his dreams and his happiness has doubled since the arrival of his daughter. We wish the trio all the happiness in the world and the best in their future endeavors.