Hoda Kotb and her ex-husband Burzis Kanga, Know about their married life, divorce and children 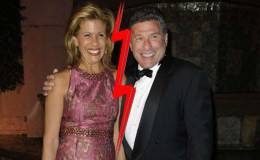 The co-host of NBC�s show Today show, is once again in a relationship, having divorced earlier. She is well known through her successful career. Once she failed in her married life. She started dating a new guy. You must be speculating about her new partner. Let�s explore her personal Life.

The co-host of NBC’s show 'Today show' Hoda Kotb, is once again in a relationship after her divorcing her husband earlier. She is a well known through her successful career but today let us discuss her personal life.

Once she had failed married life. However, 'The past is past and you have a start a new life'. Likewise, She also started dating a new guy. You must be speculating about her new partner. Let us explore her personal Life.

Previously, in the year 2005, Hoda married the University of New Orleans Head Tennis Coach Burzis Kanga but unfortunately, the couple, who first met on Valentine's Day called it quits after just 2 years of marriage in 2007.

They divorced on valentine day itself. Later, Hoda was diagnosed with her breast cancer.

There are many assumptions done by their fans, did Kanga leave Hoda precisely because of her breast cancer? The reason is still unknown.

Her cancer struggling days were documented in the Today Show along with following successful treatment on Television.

Though, she did not give the proper reason for her divorce. She revealed that Valentine day is the Worst day of her life.

Apparently, while people enjoy Feb 14th with their loved ones, Hoda thinks that day as a black day of her Life. During the two years of their marriage, the couple was not blessed with children.

Later, Hoda was dating Jay BlumenKopf but eventually, he dumped Hoda. After break up with Jay, she has been dating New York Financier Joel Schiffman.

Hoda Kotb in a photo shoot

The couple revealed about their relationship only after their pictures were revealed on the web. Hoda was with her Beau at the Rio Olympics held in Brazil.

Turned out to be a Gorgeous night in rio xo

Back in 2013, the duo was spotted at the beach in Florida that made everything clear that they are deeply in Love and enjoys spending time with each other.

The pair was seen together in various events and occasions. Hoda, along with her boyfriend were present at the 25th annual Chris Event.

Similarly, the two of them were also spotted with a bunch of their friends enjoying a night out at New Orleans. Looking at her recent Instagram posts we can say that the couple is still together and going on serious in their relationship.

During her appearance on Watch What Happens Live with Andy Cohen in September 2018, she was questioned about her relationship with Schiffman and their future plans about marriage.

"I love Joel. I mean, I’m going to be with Joel until my last breath — I know that."

Andy Cohen referred the couple to Kurt Russell and Goldie Hawn who have been unmarried for 35 years and still very happy in their relationship.

They first met at a Wall Street event and dated quietly for some years before going public in 2015.

In October 2016, Kotb revealed the couple was moving in together. It was a big step to get a place with her new beau. Speaking on this, she said:

"Joel and I are getting an apartment together, so we went to see it with the measuring tape. It's a little weird to be in your 50s and we're like Hey, we're moving in! It's like your kids. It's so weird."

This adorable couple then took their relationship even further, when they adopted a baby girl Haley Joy in February 2017. Kotb explained in an interview that treatment for breast cancer left her unable to conceive. After moving in with Schiffman, who had a daughter from a previous relationship, Kotb brought up this difficult topic of adoption.

Kotb revealed they worked with a New York adoption agency and left Schiffman's name off the paperwork to speed up the process.

She appears on the Fourth hour of Today Show. She began a career in 1998 as a correspondent. She has also written a New York Times bestselling books Like 'Bad Zones Cancer', 'Bad Hair', 'Kathie Lee' and 'How I survived war zones'.

She also appeared in music Video 'For I’m Gonna Love You Through It' by Martina McBride. Recently in 2016, she released her third book 'Where They Belong'.

The book is about the best decisions people almost never made, including various stories of inspiring people that have found themselves in completely unexpected moments and circumstances.