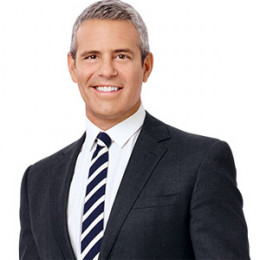 Andrew Joseph Cohen, better known as Andy Cohen, is Emmy Award-winning host, producer and author best known as the host and executive producer of Watch What Happens Live with Andy Cohen. He also serves as an executive producer of The Real Housewives Franchise. Cohen is a writer and has written three books: Most Talkative: Stories from the front lines of pop culture, The Andy Cohen Diaries: A Deep Look at a Shallow Year and Superficial: More Adventures from the Andy Cohen Diaries. Currently, he is in love relationship with Clifton Assuncao, since 2015.

Andy Cohen was born on 2nd June 1968 to parents Evelyn and Lou Cohen in St. Louis, Missouri, U.S. He is an American and has the citizenship of United States of America. He belongs to a Jewish family.

During his childhood, he attended Camp Nebagamon For Boys in Lake Nabagamon, Wisconsin. He graduated his high school from Clayton High School during 1986. Later, he attended Boston University and passed out with a degree in broadcast journalism.

After completing his degree, Andy Cohen interned at the CBS News along with Julie Chen. At CBS, he worked for nearly ten years and started working as senior producer of The Early Show, a producer for 48 Hours, CBS This Morning and a vice president of original programming for the cable network Trio in 2000.

In 2004, he joined Bravo when the network purchased Trio. He is a regular host on Today and Morning Joe and co-hosted Live! With Kelly and The View. Later, he appeared as a guest on the television show, The Comeback and Saturday Night Live.

He also made his appearance in the Lady Gaga’s music video G.U.Y. on 22nd March 2015 and hosted Hollywood Game Night on NBC as well.

Nowadays, he is a host of the Bravo night series Watch What Happens Live with Andy Cohen. The show was previously named Watch What Happens Life, until 19th December 2016. It premiered on 16th July 2009 which features Bravo’s own reality programming in the manners of aftershow. Till now, he has hosted 1244 episodes in 14 seasons.

Moreover, he has launched his book imprint Andy Cohen Books, and in November 2016, he became a New York Times best-selling author for a fourth time with the release of Superficial: More Adventures from the Andy Cohen Diaries.

He also achieved similar success with The Andy Cohen Diaries: A Deep Look At a Shallow Year in 2012 and Most Talkative: Stories from the Frontlines of Pop Culture.

Andy has received different awards in his lifetime. In 2004, he won 2 Peabody Awards as an executive producer of the Trio documentary The N-World and the Bravo reality-TV competition Project Runway.

As an executive producer, he won his first Emmy Award in 2010 for his Outstanding Competitive Reality Series Top Chef. In December 2012, GQ listed him as one of the 25 Best Dressed Men of the year 2012. The same year, he was chosen as one of Broadcasting & Cable’s Digital All-Stars.

Andy Cohen is the first openly gay host of an American late-night talk show. He was previously in a love relationship with Lance Bass, since 2012. The couple even had kissed but left out the full extent of their brief fling until now.

He was one of the TV personality who was in the hot seat when he was asked some personal questions, especially about his bedroom antics by Sonja Morgan. Without hesitating, he answered that he slept with Lance Bass with beaming smiles.

Unfortunately, the couple split and now, Lance is happily married to husband Michael Turchin in December 2014.

Currently, Andy is dating his boyfriend, Clifton Assuncao, since 2015. The pair first met on the opening night of his AC2 Tour in March. Their relationship created a controversy among the viewers: as Andy is 49 whereas, Clifton is just 28.

They also had quality time with each other and had a dinner date Sunday night at the Waverly Inn in Manhattan’s West Village. As per the fellow, diner tells DailyMail.com that the pair were affectionate throughout the meal, drank wine and shared their food.

DailyMail.com also revealed that the pair were dating in April after Clifton twice joined Andy on a trip abroad to Barry Diller’s $150m yacht Eos. He is the best friend of Anderson Cooper and Bethenny Frankel.

Cohen made an announcement that he's soon being a father via surrogate during an episode of Watch What Happens Live in December 2018. Besides, he is not to be confused as the former husband of Lisa Breckenridge.

During the very episode, he told the viewers,

"I’ve always tried to be as transparent as possible about my life. I overshare and I expect everyone around me to do the same. Tonight, I want you to be the first to know that after many years of careful deliberation, fair amount of prayers, and the benefit of science, if all goes according to plan, in about six weeks time, I’m going to become a father thanks to a wonderful surrogate who is carrying my future. Family means everything to me and having one of my own is something that I’ve wanted in my heart for my entire life."

He declared his baby's sex while appearing on CNN's live New Year Eve show. He revealed,

"This is the biggest year for me. It’s a boy and I got to tell you something, I cannot wait to meet this boy."

"When I was growing up and when we were growing up … I just never thought it would be possible as a gay man to grow up and have a family. And here we are in 2018, almost [2019], and anything’s possible. And I’m so grateful to a wonderful surrogate that I’m working with."

Well, a major occasion is approaching for Cohen. According to People, his baby shower will be hosted by Real Housewives stars. Real Housewives of Beverly Hills cast member Kyle Richards is organizing the baby shower later in January 2019 and all are so excited for the big day.

Andy is one of the famous TV hosts who has spent his entire life in the same field hosting different TV shows. He has an estimated net worth of $15 million from his career in hosting including Live with Andy Cohen.

Currently, he lives in a luxurious apartment situated in New York which current value is around $0.9 million. His annual salary is $2 million.