Home Article The Curious And Peculiar Love Story Of Bella Hadid And The Weeknd; Their Full Relationship Timeline At Glance

The Curious And Peculiar Love Story Of Bella Hadid And The Weeknd; Their Full Relationship Timeline At Glance 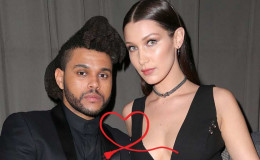 There have been multiple ups and downs and few awkward encounters since Bella Hadid and The Weeknd (Abel Tesfaye) first met back in 2015. Here we have compiled the chronological order of this complex love story between the pair.

Although Bella Hadid and The Weeknd might be back together as the adorable couple we once knew, it's not always been rainbows and sunshine for the pair as they went through on and off relationship for three years.

There have been multiple ups and downs and few awkward encounters since Hadid and The Weeknd (Abel Tesfaye) first met back in 2015. Here we have compiled the chronological order of this complex love story between the pair.

According to E! News, Bella, and Abel met at Coachella. A source said there were lots of flirts between the pair and they "really clicked". US Weekly further revealed the couple was on double dates with notable personalities such as Gigi Hadid and her then-boyfriend Cody Simpson, as well as Miley Cyrus and Patrick Schwarzenegger.

The Weeknd was interviewed by The New York Times and asked whether he's in love. He responded:

"I don't know, to be honest with you. I don't think so. Maybe. It's no, it's yes, it's maybe," he responds, which seems very suspicious."

There's no doubt more fuel was thrown in the gossip fire even though Abel refused to confirm it.

The couple showed their first public display of affection when they were spotted holding hands while attending Fashion Week in New York. 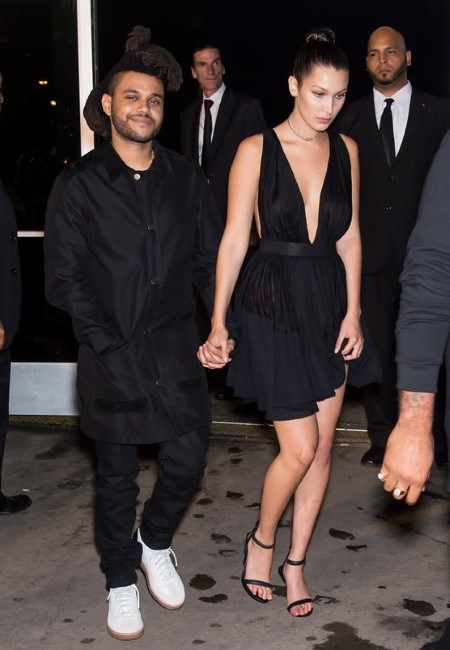 This was as good a confirming as it gets that they were, in fact, an official couple.

In an interview with Rolling Stone, Abel further revealed the couple met at the right time claiming himself to be clear-thinking at the moment.

Bella made an appearance in The Weeknd's music video "In the Night" where she plays femme fatale. In one of the scenes, there's a stunning shot of the pair riding on a motorcycle together. Meanwhile, Bella looked flawless throughout the video.

Before the year ended, it was reported the couple is taking a break due to busy schedules, although they are still in each other's lives, albeit not as exclusively as before.

At the 58th Grammy Awards, the couple made their arrival together. Both of them looked stunning. 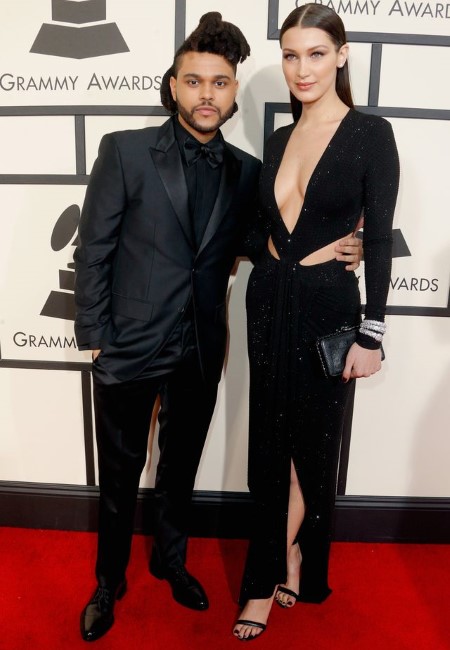 Bella Hadid and The Weeknd at the 58th Grammy Awards
Source: Cosmopolitan

"As a girlfriend, I wanted to be there to support him. Seeing him so happy when he won a Grammy made me so happy."

There's no doubt the pair were in the honeymoon phase of their relationship.

Abel was seen supporting Bella at the Fashion Los Angeles Awards of the Daily Row. The couple looked so cute, you could almost run out of words. 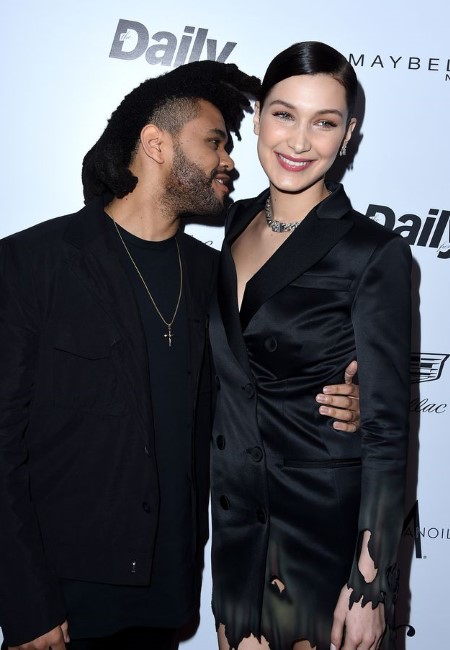 Bella Hadid and The Weeknd at the Fashion Los Angeles Awards
Source: Pinterest

This adorable duo further solidified their relationship with this public appearance.

Bella and Abel made another red carpet appearance looking adorable together. This time at the Met Gala where they happened to be wearing matching Givenchy ensembles. 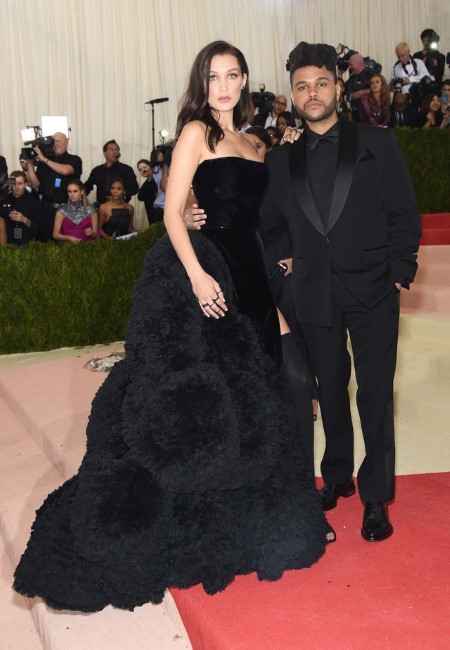 Bella Hadid and The Weeknd at the Met Gala
Source: Pinterest

They couldn't look any more appealing, could they?

August 2016: Bella Opens Up About Her Boyfriend

During an interview with Glamour, Bella said:

“I’m proud of The Weeknd and the music he makes, but I really love Abel.”

She further revealed the pair decided to make their public appearance at the Grammys because it was the big night for her boyfriend and she wanted to be there to support him.

Bella and Abel flew to Tokyo for their vacation. Upon their return, the couple celebrated Bella's 20th birthday as she shares a hot snap on Instagram.

Everything seemed to be going smoothly.

People reported the couple split after a year and a half. A source blamed their schedules, and reportedly said:

“Abel is focusing on finishing and promoting his album … they still have a great deal of love for one another and will remain friends.”

However, just two weeks after their initial break up, the pair is united on the stage of Victoria's Secret Fashion. Bella is walking in her first show while Abel is one of the performers. Bella later praised The Weeknd on Instagram.

I can't believe it! I was smiling SO HUGE on the inside I promise!!!! The most fun and nerve racking experience of my life but I wish I could do it over and over and over again!!!!! Thank you @theweeknd for being the best and most incredible performer on the planet. You KILLED it, as always And not enough thank you's to @ed_razek @10magazine @johndavidpfeiffer @monica.mitro and the whole VS family!!! thank you for believing in me I love you all so so so much

Meanwhile, Bella before taking the stage earlier revealed Abel was still her best friend and she was excited because she was walking during his performance.

Images emerged of The Weeknd and Selena Gomez kissing. Bella did not take this too well and showed everyone how exactly she was feeling on Instagram.

All the parties involved ended up unfollowing each other on social media. People reported Bella is "hurt and pissed" that her former boyfriend moved on with Gomez. There were rumors Abel and Selena were set to appear in a music video together.

October 2017: Bella Over Her ex Before The Weeknd And Selena Call It Quits

Yolanda Hadid, Bella Hadid's mother appeared on Watch What Happens Live With Andy Cohen where she revealed her daughter is totally over her ex who moved on with Selena Gomez.

Later the same month, something unexpected happened. After 10 months of dating and multiple public appearances, it was reported Gomez and The Weeknd broke up. Selena reportedly moved on with Justin Bieber.

Following Abel's break up with Selena, The Weeknd is photographed leaving Bella's apartment in New York City, igniting rumors of them getting back together.

Hadid appeared to give another chance to her former boyfriend which apparently freaked out her family.

April 2018: The Couple Go Back To Where It All Began

As the dust settled from the initial reconciliation rumors, Bella and Abel were spotted at Coachella, the place where they first met three years earlier.

The pair caused a stir after reportedly kissing at Coachella. A source revealed how they were completely all over each other, canoodling and being affectionate while she sat on his lap.

Bella went to the Cannes Film Festival where she is spotted kissing The Weeknd. Subsequently, many sources began to confirm the newly reconciled pair is definitely back in a relationship.

A source further revealed the couple was certainly not keeping it a secret as they were going at it on the beach with hundreds of observers.

Bella and Abel are seen getting extremely cozy with each other. After getting caught kissing in Cannes, they were spotted on a romantic date in the most romantic city in the world, Paris. 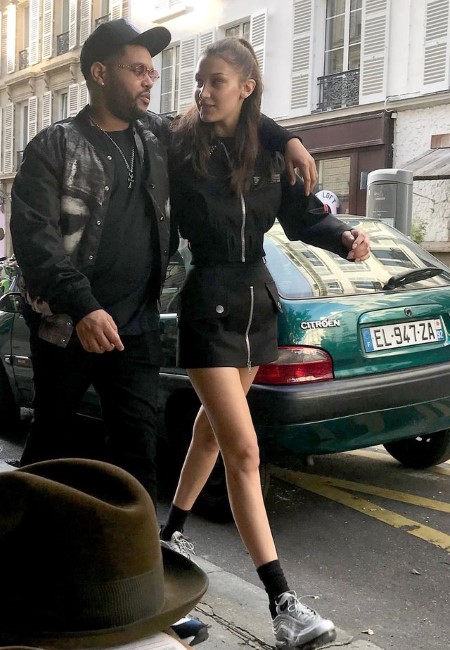 Bella Hadid and The Weeknd spotted together in Paris
Source: Cosmopolitan

Previously, The Weeknd almost made it official on Instagram when he shared a photo of a pair of hands believed to be Bella's. There remains very little doubt these former lovebirds have patched things up and are back together again.