Home Article Who Is 'Rehab Addict' Star Nicole Curtis Dating To? Know About Her Boyfriend and Relationship

Who Is 'Rehab Addict' Star Nicole Curtis Dating To? Know About Her Boyfriend and Relationship

Someone rightly said Dating should be less about matching outward circumstances than meeting your inner necessity.

The Rehab Addict star Nicole Curtis has sucessfully restored many homes in her career and now it looks like she is reviving her love life as well. After a separation and a messy custody battle with her ex, she has finally moved on. She currently has a new beau in her life and recently made their relationship with Instagram- official.

Though she made her beau picture public, she did not provide much details about him, which left her fans curious about basic questions, such as Who is he? What do he do for Living? How did they meet? and so on.  So, if you are one of those curious fans, then continue reading below, as we have it all covered:

Nicole Curtis is Dating; Who is her Boyfriend? Know more about him

The Reality Star Nicole Curtis' boyfriend is Ryan Sawtelle who works as an Executive Director and founder of a military non-profit organization named White Heart Foundation. Though she introduced him recently, she was dating him for over a year. 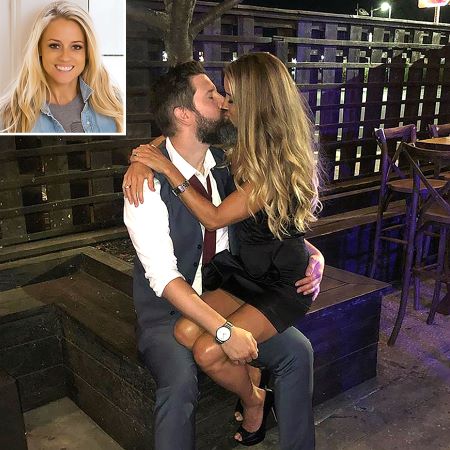 Nicole is over the moon about her new man and talked to PEOPLE about her current relationship. She said:

“My heart is happy and having him near me brings a calm I’ve never known, Not that it’s been easy. Everyone has a great first few months rocking everything they have in common, but after six months you start digging into the other stuff and you either grow apart or negotiate those differences and move forward. And [you] have to make a decision to focus on the fun"

Nicole also spilled the beans on the inception of their romance and you would be surprised to know, it was Curtis who took the first step in the relationship. She first started following Ryan on Instagram due to his posts related to his 8-year-old niece Arden’s battle with Diffuse Intrinsic Pontine Glioma (DIPG).

The star started connecting to these posts because her friend's 9-year-old daughter, Tessa who died just a year ago because of cancer as well. So, when she heard that his niece also died she thought she should meet him and provide help in any way that will help reduce his grief.

Today, her 11th birthday. So many things to say, but hard to find a voice. Her laughter, her love, her endless dancing and singing —our little mama, the entertainer, the rockstar...Happy Birthday, love #tessaprothero @loveteamtessa #forever9 #pediatriccancer #morethan4

So, they met the first time, because of his niece death but they kept the meeting light and did not talk about any heavy topics such as Cancer. The meeting was super pleasant and the pair met again, this time to help Curtis in a shoot.

Soon, they were frequently started meeting, without even realizing that they were kinda dating. The couple, however, is officially dating for over a year and she is enjoying a lot at present and do not want to think too much of the future. Looks like Carpe diem is her motto right now.

Nicole had many Public Affairs in the Past; Know about her Past Relationships

As the saying goes, 'you cannot have everything in the world, someone gets something, while others get something else'. The reality TV star Nicole got lots of success in her life, but she did not have a stable romantic relationship in her life.

Nicole started dating Steve Lane in college and gave birth to their child Ethan Lane. After the birth of their child, they got married. However, the marriage did not last long and the couple divorced in 2009.

You know those perfect moments in parenting that you feel like everyone in the world has all the time, but you only have it for minutes ? Yeah, got a few of those in this past week. Most parents lead off any conversation about children with the best of -my son has a 4.0, my baby sleeps through the night ...my best parent friends are the ones that say Holy Mother of God I have no clue what I’m doing, anyone else ? take the smiles when you get them, but take no offense when you don’t-instead be the one smiling and plant your feet firm and be that solid support to help them weather through. AND-if they want to wear pajamas 4 days in a row ...celebrate their choice and rock it (also buy backup pairs that look the same )

The host then started dating Shane Maguire, with whom she had her second baby named Harper. They never made the relationship public, but the legal custody for Harper made Shane name public. They had a long ugly custody battle for their son Harper and finally reached a settlement that included joint custody and $1,200/per month in child support. She talked about the agreement and stated the following:

“As a parent, you do whatever you have to do to keep peace and calm for your child — this was best for our son.”

She thought the settlement was the last of her custody battle, However, her husband did not paid her the agreed child support, so she filed a case against him.

Someone I went to high school with posted that 25 years ago tonight, we graduated. Kind of wanted to throat punch them for the reminder-I like numbers but not something like that and then I found this pic-my gram & gramps not even 70 yet & Me...17. I had made a sign on my bedroom door (vision board wasn’t around in 94) that said, marry it, inherit it or make it——and sitting so thankful for that wild spirit that was determined to go the path less taken & full of gratitude for having these 2 that never questioned just supported me til their last breath. #classof94 #lakeorion #tbt