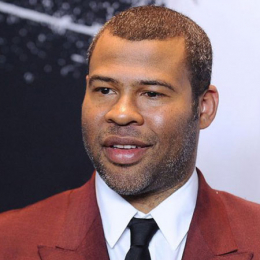 Oscar-winning director and actor, Jordan Peele is best known for his breakthrough performances in the films and TV series, especially in comedy and horror genres. The actor made his screen debut in 2002 in MTV's Comedy Weekend and after a year, he joined the cast of Mad TV which considered as a turning point to his Hollywood career.

Is Jordan Peele's Married? Who is His Wife? Know More About His Personal Life;

Jordan Peele is happily married to his longtime girlfriend, Chelsea Peretti since April 2016. She is a comedian and writer best known for playing the role of  Gina Linetti in the police comedy series Brooklyn Nine-Nine.

Chelsea first announced their marriage on Instagram posting a picture of her dog in a Hawaiian shirt along with bouquet and wedding band with the caption: “Eloped a bit ago … our only witness was this lil guy.”

eloped a bit agoour only witness was this lil guy?

The couple previously announced their engagement on November 2015 via Twitter after dating for more than two years. They first met in 2013 and after a few meeting, they eventually fell in love. In addition, the pair was blessed with a baby boy, Beaumont on July 1, 2017.

Jordan Peele holds an estimated net worth of $12 million and all thanks to his career as a filmmaker, comedian, and actor. The actor earns nearly $1 million from his appearances in movies and around $300k-$500k from TV series.

In 2017, Peele became the first black writer-director to earn more than $100 million at the box office with the instant success of his debut movie, Get Out which made under the budget of $4.5 million. The movie stars the cast like Daniel Kaluuya, Allison Williams, Caleb Landry Jones, and others. Moreover, the film eventually goes on to gross $255 million worldwide. 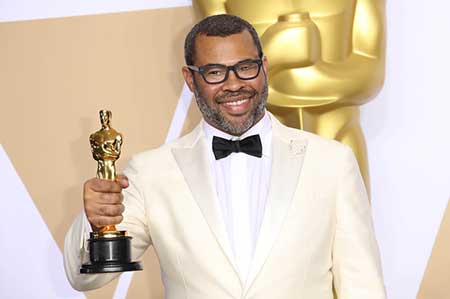 Jordan Peele received awards for "Get Out."
SOURCE: Latimes

Chelsea Peretti is an American comedian, actress, and writer. She is best known for her role in Brooklyn Nine-Nine.

Beaumont Peele is best known as the son of Chelsea Peretti and Jordan Peele. He was born in 2017.