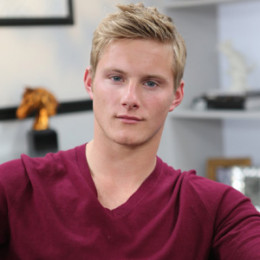 Alexander Ludwig,25, is a Canadian actor, model, and singer best known for his role as Cato in the 2012 movie The Hunger Games for which he earned a Teen Choice Award nomination for Best Villain. Further, he is known for his roles in The Seeker: The Dark Is Rising.

Ludwig was born on May 7, 1992, in British Columbia, Canada to Harald Horst Ludwig and Sharlene Ludwig. Professionally, his mother was an actress and father is the co-chairman of the board for Lions Gate Entertainment Corp and a businessman. He has three younger siblings including a sister named  Sophia and twin brothers named Natalie and Nicholas.

Ludwig attended the University of Southern California and lived full time in Los Angeles where he was in The Phi Kappa Psi, an American collegiate social fraternity.

Alexander Ludwig was interested in the field of acting from his early age. Although his mother was an actress, he had to convince his parents to support his desire to pursue a career as a child actor.

At the age of nine, the renowned actor began his career as he appeared in a Harry Potter toy commercial. Later he was cast in different movies including Scary Godmother: The Revenge of Jimmy, Air Bud: World Pup, The Sandlot: Heading Home and Eve and the Fire Horse.

In addition to movies, Ludwig has featured in television series as well. He has appeared in The Dead Zone, The Seeker: The Dark Is Rising and A Little Thing Called Murder. In The Seeker, an American drama he got the leading role after a tiring audition process.  His next lead role was as Seth in the film production of Race to Witch Mountain along with Dwayne Johnson, the wrestler-turned-actor. Seth is a part originated by Ike Eisenmann in 1975 original, Escape to Witch Mountain.

Moreover, Ludwig played a role of Cato in the 2012 movie, The Hunger Games. The proficient actor was able to receive the 2012 MTV Movie Awards along with Josh Hutcherson and Jennifer Lawrence. He further received 2012 Teen Choice awards for the role of best villain in The Hunger Games.

In 2012 he released his first single Liv It Up and the following year he co-starred in the movie Grown Ups 2 and Lone Survivor. Along with Shelley Hennig, Teen Wolf actress, he appeared in The Band Perry’s music video for Gentle on My Mind.

Alexander Ludwig had a few celebrity girlfriend till date. He first dated popular actress Lindsey Vonn. Though the actor never confirmed his relationship with Vonn, he was dating her during 2016. They were seen together on numerous occasions, but Ludwig insisted her as his friend in front of the public.

From 2012 to 2014 he dated, Nicole Pedra. They dated for two years. Currently, he is in a relationship with a famous actress, Kristy Dawn Dinsmore.

Ludwig is living a luxurious life from his astonishing net worth of $97 million as per some online sources.