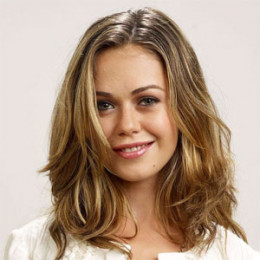 Alexis Dziena is a popular American actress who has been active in the film industry since 2002. Dziena is best known for playing the character of  Kira Underlay in ABC series, Invasion. She is also known by her nickname, Wonder Girl. She debuted on television at the age of 17.

Dziena was raised in the small South Jersey shore town of Sea Isle City along with her older brother, Alex who is a musician and a DJ.

She attended the private Saint Ann's School. She joined the school alongside her co-star from Bringing Rain, Paz de la Huerta. Later, she joined The American Academy of Dramatic Arts and appeared in plays as well.

Dziena got her first leading role in the Lifetime channel's original made-for-TV movie, She's Too Young in 2004. She portrayed a sexually active teenager in the movie. She rose to fame with the role of a sheriff's daughter, Kira Underlay in ABC's TV series, Invasion.

In 2003, Dziena made her movie debut in a science fiction horror film, Mimic 3: Sentinel. Her other screen credit includes Rhinoceros Eyes, Entourage, Stone Cold, Fool's Gold, Tenderness, Wrong, Sister, Without Ward and One Life to Live.

Alexis Dziena is possibly single at the moment and has no children yet. Previously, she was in a romantic relationship with actor and musician, Michael Pitt. The duo first met during the early 2000s and started dating.

The couple dated for around two years and broke up in 2004. The reason behind their break up was not made public. Her ex-boyfriend, Pitt started dating Asia Argento after their break up.

Dziena started dating boyfriend Jeffrey Francis Ausley in 2013. The couple split due to the alleged abusive behavior of Dziena. The Entourage actress reportedly threatened to hurt Ausley if he tried to split with her.

Dziena is considered one of the controversial actresses because of her relationships. However, Ausley got a restraining order against her. The court has ordered her to stay 100 yards away from her ex-boyfriend, Ausley.

In 2011, Dziena tried to get a restraining order against her parents as well. She was afraid that her father would murder her for money, but the judge turned her down.

As of 2019, she is single. She is not in a relationship and has no boyfriend.

Alexis Dziena stands at the height of 1.5 meters (5 feet 1 inch). She has earned an impressive net worth of $3 million.