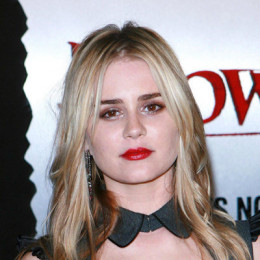 Alison Lohman is an American actress who has appeared in several of the Hollywood movies like Matchstick Men (2003), Where the Truth Lies (2005), The Big White (2005), and so on as well as in some television series. She was born and raised in Palm Springs, California. She was born to mother Diane Lohman and father Gary Lohman. She attended Royal Academy of Dramatic Arts to study acting. After her graduation, she debuted on the big screen appearing in sci-fi movies like 'The Sea Monster', 'Kraa', and 'Planet Patrol'.

Alison Marion Lohman was born on September 18, 1979, in Palm Springs, California. Her mother, Diane Lohman is a patisserie owner and her father, Gary Lohman is a Minnesota-born architect. Alison has one younger brother, Robert Lohman (born in 1982) and she has two cats; Monk and Clint.

She belongs to the white ethnicity and holds an American nationality. She is one of the popular American actresses who had worked on numerous movies and series.

Alison was a bright student during her school days, she has secured A's in all subject except in drama because she was too shy. She has portrayed the role of Gretl at the age of nine in The Sound of Music.

After two years she won the Desert Theater League's award for "Most Outstanding Actress in a Musical" for the title role in Annie. By the age of 17, Lohman had appeared in 12 different major productions and had been played back singer for the likes of Frank Sinatra, Bob Hope, and the Desert Symphony.

She was awarded National Foundation for Advancement in the Arts and she gets a scholarship in Tisch School of the Arts, but she refused to join. In 1997 after completing her graduation she moved to Los Angeles to pursue a screen acting career.

Lohman began her acting career through B-movies such as; Kraa! The Sea Monster and Planet Patrol. later she involved in television production and children's films.

She got her first pivotal role in  White Oleander along with Michelle Pfeiffer. The following year, she has appeared in Matchstick Men starring Nicolas Cage. She has done several movies such as; The Big White, Flicka,  Drag Me to Hell and much more.

She has worked with many popular faces of Hollywood including; Holly Hunter, Tim Blake Nelson, Peter Kosminsky, and Robin Wright Penn.

Lohman was married to Mark Neveldine on August 19, 2009, at St. Anthony's Catholic Church in  Watertown, New York. The duo was blessed with a baby boy in 2010 whose name is  Billy Neveldine. The birth details of Billy was hides behind the curtains until August 2011. Later she gave birth her second child by the end of 2013.

Alison and Mark were together for eight years and there isn't any kind of rumors regarding their divorce or split. Prior her marriage also she hasn't linked up with any guys.

The 37 years old actress, Alison Lohman has a decent amount of net worth about $5 million whereas her salary hasn't mentioned yet.

In 2003, her movie, Big Fish did the unexpected job at the box office with a total collection of  $122.9 million as the movie was made under the budget of $70 million. Her 2007, British-American 3D motion capture epic fantasy film, Beowulf earned  $196.4 million at the box office.

Beside this Lohman charged impressive sum for her appearance on movies and TV series. She is living a lavishing life with her husband and children.

She got married to her boyfriend and is living a blissful life together. The couple is blesses with two children.

He is her first child from her husband. He was born while the Ghost Rider was being filmed and she was in the cast of the movie.

This is the second child of her but no information has been revealed regarding her second child.