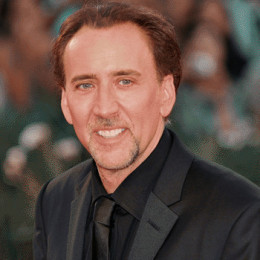 Nicolas Cage is an actor and producer of American nationality, known for his film roles in romantic comedies to science fiction as well as on action films. His film credits include Valley Girl, Leaving Las Vegas, The Rock, National Treasure, The weather Man, The Croods, Knowing etc. He was born in Las Vegas, Nevada and has been active in acting since 1980 and has been successful in the field.

Cage has had a well-known relationship history and has been married three times and divorced three times. He has also been rumored to have hooked up with several celebrities in the past and some rumors have never been verified.

Nicolas Cage was born on 7 January 1964 in Long Beach, California to August Coppola and Joy Vogelsang. He has two brothers Christopher Coppola and Marc Coppola.

He studied at Beverly Hills High School and later the UCLA School of Theater, Film, and Television.

Cage made his acting debut playing a minor role in Fast Tims at Ridgemont High with Sean Penn and Judge Reinhold.

Some of his famous movies include Racing with the Moon, Valley Girl, Peggy Sue Got Married, Wild at Heart, Honeymoon in Vegas, and Red Rock West.

He won an Academy Award, a Screen Actors Guild Award, and a Gold Globe for his role as an alcoholic Hollywood writer in Leaving Las Vegas in 1995. He received the second Academy Award nomination for his appearance as Charlie and Donald Kaufman in Adaptation in 2002.

In 2009, he was one of Hollywood's highest-paid actors earning $40 million the same year. He has an estimated net worth of about $25 million.

Previously, he had a Malibu home which he sold for $10 million in 2005. He sold the medieval castle Schloss Neidstein in the Oberfalz region for $2.5 million in 2009.

Meanwhile, he put his Rhode Island, Nevada, Louisiana, and California and the Bahamas Island (worth $7 million) in the market.

He paid $276,000 winning a bidding contest against Leonardo DiCaprio for a dinosaur skull.

As per Cage, he had the "Most Haunted House in America" situated in the French Quarter of New Orleans. The house along with another New Orleans property was sold for a total of $5.5 million in November 2009.

Cage started dating actress Christina Fulton back in 1988. They welcomed their first child together named Weston Coppola Cage on 26 December 1990.

Cage married his first wife actress Patricia Arquette in April 1995 and divorced in 2001. He tied the knot to his second wife singer and songwriter Lisa Marie Presley in 2002 but the two divorced soon after two years being together.

He married for the third time with a former waitress Alice Kim in 2004. She gave birth to their son Kal-El Coppola Cage on 3 October 2005. The couple separated with an official divorce in 2016.

Currently, he is in a relationship with girlfriend Erika Koike. The couple may get married some days in the future.

Patricia was the first wife of Nicolas who was an actress who was together with him for six long years.

The daughter of Elvis Presley, Lisa Marie was the second wife of Nicolas and the couple was together for 2 years before divorce.

Alice Kim is a former waitress and the current wife of Cage. They married on a private ranch in California on 2004.

Weston is the first child of Cage.

Kal is the second son of Cage.