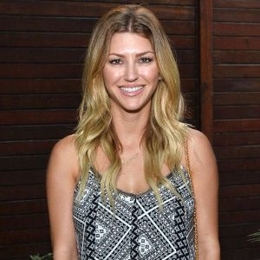 There is a saying that everything we need will come to us at the perfect time, and we need to be patient and have faith on God. This quote perfectly matches the love life of an American actress AshLee Frazier. On the course of finding a perfect life partner, Frazier participated on TV shows like The Bachelor and Bachelor In Paradise, but the actress wasn't successful. Also, her first marriage did not last long. Besides, she is now living happily with her current spouse and daughter.

Former The Bachelor contestant, AshLee Frazier, was previously married to her high school sweetheart, Andrew Barbarow. The two dated for quite long before tying the knot. Frazier and Andrew tied the knot on 26th November 1997 in Fort Bend County, Texas. 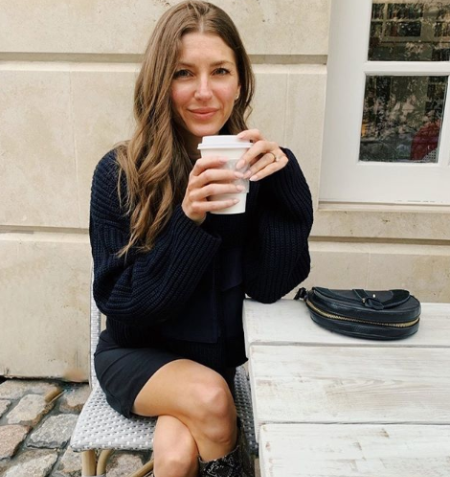 Frazier was just 17 years old when she got married. Well, you must be wondering how she could get married at such a young age, which is illegal as she was still underage. Isn't it? The fact is that, in an interview, AshLee's father revealed that he agreed to sign off on the wedding with the hope that Andrew would take good care of his daughter.

Her farther revealed that he had reservations as Frazier was not too far from being 18. He added;

"I felt like if I didn't let her get married, then maybe there would be some choices made that wouldn't be the best choices."

Nevertheless, things went just opposite what her father had dreamed of. AshLee and Andrew sadly parted their ways after 17 months of their nuptials, citing irreconcilable differences. Their divorce was finalized on 3rd August 1999. 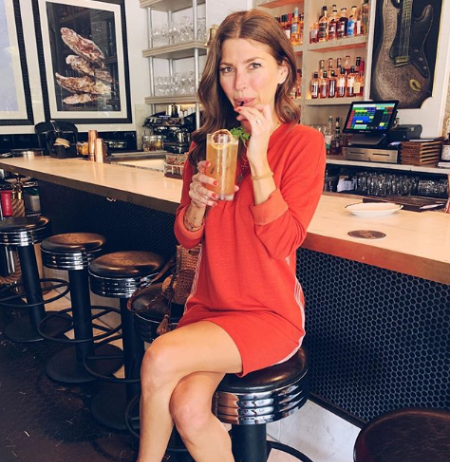 When Frazier was asked whether they were actually divorced or not, she replied, saying, 'Yes, it was actually a divorce.' Likewise, the actress admitted the reason for their separation was her wrong decision to get married at such a young age.

Bachelor In Paradise's former contestant further said that everyone faces different barriers in life, but in her case, she may have failed to handle the things on the best way which she should have. According to her, she and her then-husband did not have hard feelings for one another that led them to their divorce in a mutual understanding.

Ever since their split, Andrew is off the radar whereas, the TV personality, AshLee, is enjoying her married life to the fullest with her current beloved spouse.

Dating Life And Engagement With Her Current Partner

Even such a tragic heartbreak did not stop, AshLee Frazier from falling for a new guy. Besides, from her first failed marriage, Frazier got a chance to learn different lessons about relationships.

In 2013, she began dating her fellow alumnus of The Bachelor, Brad Womack. Unfortunately, her relationship with Brad was also shortlived. The duo separated after being together for only a few months. 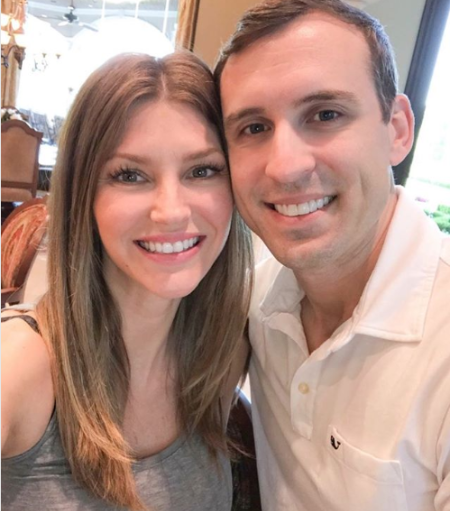 Frazier then met her now-husband Aaron Williams, a Houston-based real estate developer in 2007. They remained friends for almost 10 years, and later, their friendship turned to a romantic relationship. The two were open about their affair since the starting, and they used to make frequent public appearances together.

Frazier likewise used to spend quality time together with her boyfriend by visiting exotic places. Similarly, she kept on giving a glimpse of her love life via social accounts by sharing lovely pictures with her lover. 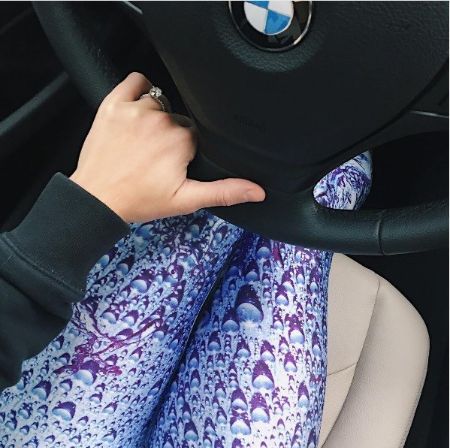 After dating for 11 months, the pair decided to take their relationship to the next step and finally engaged on Saturday, 5th November 2016. While they were vacationing in NYC, Williams got down to one knee and proposed the actress with a 3-carat oval-cut diamond ring on the Brooklyn Bridge.

They further had a romantic dinner at NYC’s Scarpetta. Frazier revealed the happy news to the fans via her Instagram account by sharing a lovely picture showing off the engagement ring. Soon, her well-wishers began showering with congratulatory messages through the comment section.

Details Of The Lavish Wedding Ceremony

AshLee Frazier and her fiance exchanged the vows after four months of their engagement. The two tied the knot on Saturday, 18th March 2017, in an outdoor ceremony, a splendid private residence in Conroe, Texas. They exchanged the vows in front of 180 guests, including their close friends, co-stars, and family. 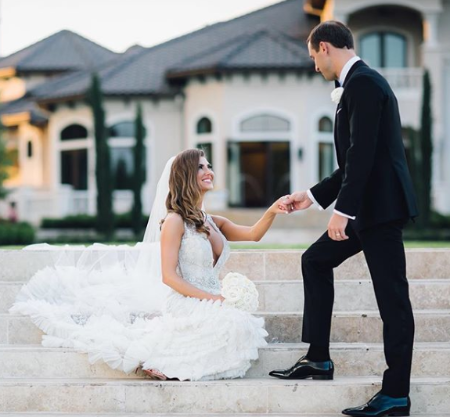 Frazier's The Bachelor contestants, including Elise Mosca and Erica Rose, were also present at the ceremony. Several attendants of the wedding congratulated the couple via their respective social accounts by sharing lovely pictures of the matrimony.

In an interview, the TV personality recalled the moment of their nuptials and said;

“It was held at my in-laws’ estate which includes an equestrian arena and stable that overlooks a 10-acre lake." 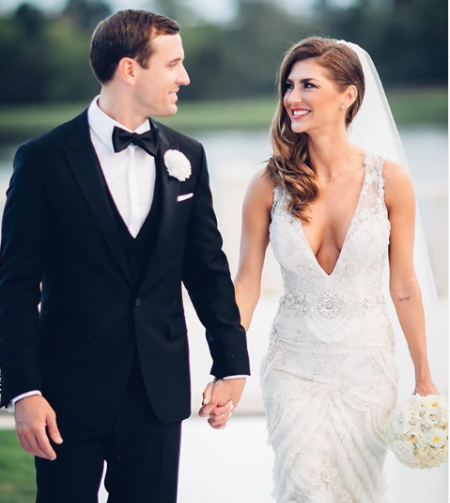 The lightning, linens, and furniture were arranged by Aztec Events & Tents for the event. Similarly, the entrance of the location was illuminated by lanterns, and there was also a large white floral arrangement on four large pillars. Houston-based florist Gallery Flowers made the whole floral arrangements for the matrimony.

Frazier's father was the one to officiate the wedding, and he further walked his daughter down the 160-foot aisle. Moreover, Danyett from Two Be Wed planned the whole event. According to the actress, Danyett stayed by her side while they were preparing for the wedding, and she really enjoyed every moment of the planning. 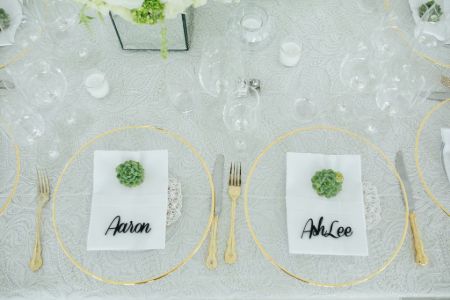 The bride walked down the aisle wearing a lace gown and a floor-length veil designed by Ivory Bridal Atelier. Her beauty was further enhanced by a necklace from Golden Thread. Besides, she wore two different heels from Christian Louboutin and Gianvito Rossi.

On the other hand, the groom looked stunning in a tux by Boss that featured clean lines and for the special day, he chose Creed Silver Mountain Water cologne scent.

Furthermore, the bridesmaids wore BHLDN gowns, whereas they picked their own hair and makeup based on their personalities. Similarly, groomsmen wore Michael Kors tuxes, which they rented from Houston-based outpost Mr. Santos Fashion Design. 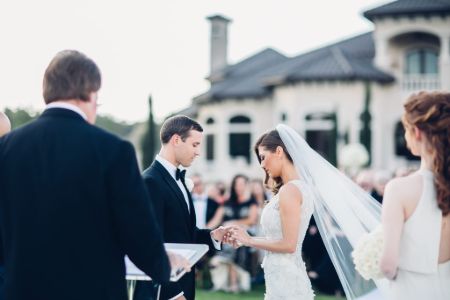 During the cocktail hour, the pair took rosemary mushroom crostini and smoked quail diablo. Besides, the guests were served with lentil loaf with maple glaze followed by vegan veggies and salad paired. Additionally, they also enjoyed Melville Wine from California.

Similarly, all attendants of the ceremony received succulent from The Succulent Source, which the newlyweds gave. Another best step they took was the couple decided to do donations to Children’s Methodist Home rather than registering it.

All the beautiful moments of the memorable day were captured by the photographer Ashley Streff.

Pregnancy And Birth Of A Baby Girl

It didn't take long for AshLee Frazier and her husband to start a family as they welcomed their first child almost after one and a half years of their wedding. She first announced the news of pregnancy via Instagram by sharing a picture that featured a baby womb. 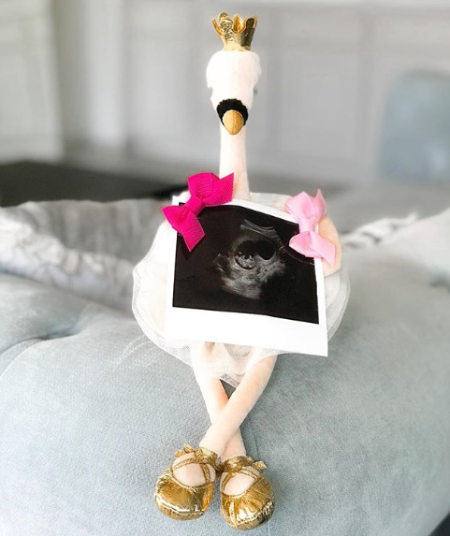 Frazer further disclosed the gender of their soon-to-born child through caption writing,' Spring has sprung us a baby girl!' Well, she received several congratulatory messages from her fan-followings on the comment section.

Similarly, on 23rd April 2018, AshLee uploaded a picture showing off the baby bump. She captioned;

"Okay so maybe there is a little bump. I’ll be 20 weeks this coming Thursday. Each week I send Aaron a screenshot of my app and what growth our baby girl has had. Week 19 she’s the size of a mango. Aaron responded with, “She’s growing so fast. She’ll be off to college before we know it.” He’s right. For now, I’ll simply enjoy this precious moment gifted by God." 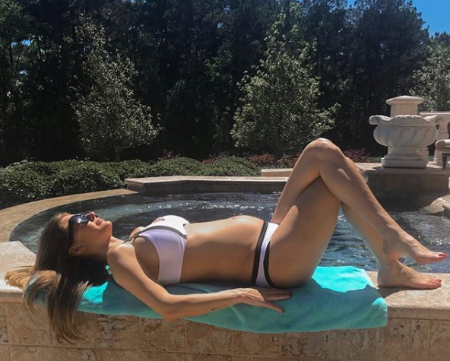 From then onwards, Frazier kept updating her fans about her pregnancy. Finally, on 11th September 2018, she gave birth to their baby daughter Navy Lee Williams at 3:23 am. At the time of birth, Navy weighed 6 lbs., 11 oz., and measured 19 inches long. 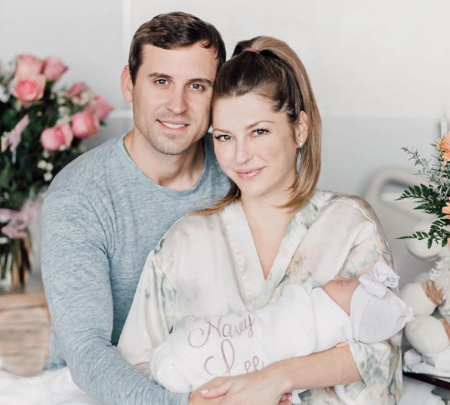 The television personality took Instagram to share the happy news. She uploaded a picture of herself with her spouse and their newly born baby. In an interview, Frazier revealed that they named their daughter after the name of her father, Bruce Lee.

According to AshLee, her parents changed her name from Ashley to AshLee when they adopted. She wanted to make her parents sure that she felt like part of the family. So to continue the tradition of their family, the actress, and her hubby also did so. 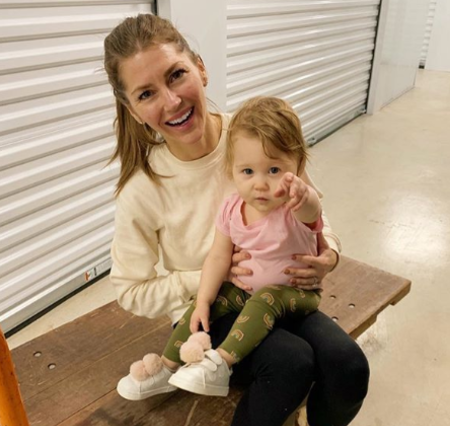 Frazier is living happily with her spouse and daughter. The pair are successfully raising their daughter by fulfilling all needs.

Journey To The Bachelor

AshLee Frazier is the one among 25 contestants on season 17 of the TV show The Bachelor. She competed to win the heart of Sean Lowe. On the show, her journey ended, becoming the third.

On the final, Sean chose Catherine Giudici as his fiance, whereas Lindsay Yenter secured the second position. Later, she also appeared on the Bachelor In Paradise.

The Bachelor's former contestant, AshLee Frazier, summons a good sum of money from her career. She likewise appeared on Bachelor In Paradise. As a TV personality, Frazier probably receives an average salary of around $44579 per annum.

Navy Lee Williams is the daughter of an American actress AshLee Frazier and her husband Aaron Williams.