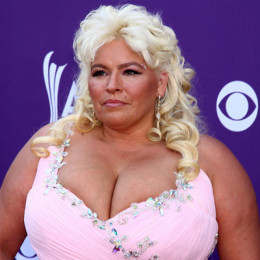 Beth Chapman's real name was Alice Elizabeth Smith. She was a reality TV star of the series called 'Dog and the Bounty Hunter'. She was born to a professional Baseball player, the Kansas City Athlete Garry Smith. She has worked as a Gymnast, Ice skater, night club singer, a waitress and a clerk in her early life besides being a bounty hunter and bail bondsman. She was also popular among her fans for her huge breasts which are said to be natural but seem incredibly oversized to be natural.

The reality star Beth Chapman was born as Alice Elizabeth Smith on October 29, 1967, in Denver, Colorado, USA. She was popularly known for the show named Dog the Bounty Hunter. She was a frequent fixture of the show.

At the age of 29, she became the first youngest licensed bail bondsman in Colorado history. Later the history was broken by her step-daughter Lyssa at the age of 19.

Before gaining fame as a reality star, she had worked as a Gymnast, Ice skater, nightclub singer, waitress, and a clerk.

Beth started her career through popular show Dog the Bounty Hunter in 2003. The show was a largely viewed American TV series which shut down after its 8th season in 2012.

Beth Chapman was a married woman, she tied a knot with her Dog and the Bounty Hunter co-star Duane Chapman in 2006 at the Big Island of Hawaii. She was the fifth wife of Duane.

The couple shared two children; one daughter and a son named Bonnie Joanne and Garry Chapman.

Repost from @janebondsurety It is the small things.... He indeed holds her heart in his hands. In the wee hours as we await the call of her emergence from the event, I am struck by many things. There isn’t much to do while you wait. Literally time feels like it’s standing still. So, you think. You watch. While many don’t understand the chaos and super cells this family weathers. I do. They are indeed the crazy glue that keeps each other together. They fight large and love even larger. I watch as the patriarch fields constant contact from the outside wanting any shred of news. He guards her. Fiercely. He is in his own private hell. You know this. You can see it in his eyes and hear his voice crack when he speaks of her. He guards her as she has guarded him so many times before. Unwaveringly and unconditionally. For many this larger than life family can be baffling. For those of us that see it on the daily, it’s easy to understand. Because at the core is an absolute love for one another and the family they have created. What the future holds for all is unknown. What I do know is that none of them will be alone. There is a blanket of peace and serenity knowing this. You see, it is indeed the small things. The gestures, the soft words spoken, being present, providing encouragement, being humble, saying silent prayers, a wink, a squeeze of the hand or uttering the word Chiricahua. All of it mattered. Every. Single. Thing. .

Primarily marrying to Duane, Beth was married to Kieth A. Barmore on August 26, 1991, but due to some personal reason couple had divorced.

She had a daughter from her previous marriage Cecily Barmore-Chapman and a son Dominic Smith from her high school boyfriend.

Once, there was a rumor of her nude picture in Playboy magazine which got viral on the internet but later it was termed as the photoshopped picture.

Beth was living a blissful life with her husband and children and there aren't any rumors of her family dispute and controversy.

Smith was diagnosed with stage II throat cancer in September 2017. She was declared cancer-free a year back but doctors found cancer cells in her all again which undergoing surgery on 27 November 2018.

Her husband and family members are so worried about her condition.

Since 2017, Smith was fighting against throat cancer. It later spread to her lungs which results in a stage four diagnosis. Despite such conditions, she started filming new show, Dog's Most Wanted in early 2019.

Everything was going fine until June 22nd when she was hospitalized and placed in a medically induced coma. Unfortunately, on 26th June 2019, she died of complications from cancer.

The 51-year-old reality star had an impressive amount of net worth of around $2 million-$3 million. Her husband has an estimated net worth of about $6 million.

Beth Chapman's body size was 42-26-32 and she had to have her bras specially made according to her size. Her height was 5 feet 7 inches. The star died at the age of 51.

First Marriage with Keith A. Barmore

He was Beth's first official husband. The couple didn't last long in their marital relation and got separated.

He is an American bounty hunter and a former bail bondsman. He was married several times and Beth is the fifth one.

He is her very first child whose personal details have not been disclosed yet.

She was born safe and is living happily with her sexy mom and hunky dad.

She was born safe. Her details about birthday and other stuffs are not provided.

He is a handsome child from his romantic parents and is often seen with his parents.