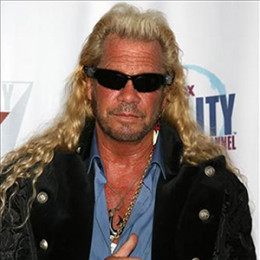 Duane Lee "Dog" Chapman I., known as Duane Chapman is an American bounty hunter and a former bail bondsman born on February 2, 1953, Denver, Colorado, the US, to father Wesley and mother Barbara Chapman. He was raised along with his four younger siblings.

In 1976 at the age of 23, Chapman was found guilty of first-degree murder of a drug dealer Jerry Oliver, when he was waiting in a car, with his friend and accidentally shot in a struggle during a deal to buy cannabis.

Duane served 18 months at Texas State Penitentiary in Huntsville, Texas, where he worked as a field worker and warden's barber.

In 2007, in an interview with Fox News, Chapman told that while serving his punishment, he prevented an inmate who was escaping getting shot. The guards congratulated him for his action. The incident inspired him to become a bounty hunter later. He was released on January 1979.

Due to his criminal record, Chapman was not allowed to own a firearm and was banned from entering the UK.

On June 18, 2003, by capturing Andrew Luster, who fled the United States in the middle of his trial on charges of drugging and raping many women, Chapman made international news. Chapman was supported by his "Hunt Team," including his son's Leland and Tim Chapman.

They captured Luster in Puerto Vallarta, Mexico, where Luster was living with a fake identity. Andrew, Chapman and his two sons were arrested by Mexican police when they were on the way to California.

On September 14, 2006, Duane appeared in Honolulu courtroom with his ankle shackled. Although the judge admitted that they were not a significant flight risk, ordered that each of them to wear an electronic monitor device around their ankle and were bailed ($300,000 for Duana Chapman, $100,00 each for Leland Chapman and Tim Chapman).

On September 29, 2006, Chapman got permission to temporarily remove the monitor device so that he can travel to the East Coast for previously planned appearances on Larry King show Larry King Live, Greta Van Susteren, Mark, and Mercedez Show on Mix 94.1 KMXB and so no.

On August 2, 2007, the First Criminal Court in Puerto Vallarta Mexico, dismissed all pending criminal charges against Duane and his sons on the grounds that the statute of limitations has expired. The US Magistrate Judge Barry Kurren on November 5, 2007, dismissed the extradition attempt, claiming that even though the cases were appealed the three are no longer charged with any crimes.

Later, Chapman appeared on Take This Job, a program about people with different occupations. It led him and the show’s production company to spin-off about his work capturing bail fugitives. The show was named Dog the Bounty Hunter and made its television debut on August 30, 2004. The show ran for eight seasons.

Dog and Beth: On the Hunt

In April 2013, Chapman, his wife Beth and his son Leland featured on the CMT reality show called  Dog and Beth: On the Hunt.

Chapman published his autobiography, “You Can Run But You Can’t Hide” in 2007. The book debuted at #1 on the New York Times Best Seller list. In 2010, he published his second book. “Where Mercy is Shown, Mercy is Given.”

He owes the "Doug the Bounty Hunter" logo goods shop in Downtown Honolulu with his wife. The Chapmans stated that they are closing the bail bonds office.

Duane is a married man. He married five times to date. Currently, his wife is Alice Elizabeth "Beth" Smith Chapman aka Beth Smith. They two met in 1986 and were on an on-off romantic relationship. 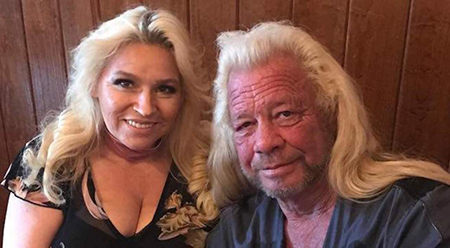 Before, his marriage with Beth, he was first involved with Debbie White, his teenage affair. They had a son together, Christopher Michael Hecht, but Chapman didn't know about Christopher.

Chapman was also married to Lo Fondo Sue Honeycutt. They tied the knot on April 1, 1972, in Pampa, Texas and later, divorce on October 27, 1977, when Chapman was in prison. They have two children together, Duane Lee Chapman II and Leland Chapman.

The boys were not allowed to see Chapman, but they soon rebuilt a relationship with their father when the kids were still young. Later Chapman got their custody.

Chapman married Anne M.Tegnell on August 22, 1979, in Colorado and later, divorced on August 5, 1982. They had three children together Zebediah Duane Chapman, Wesley Chapman and J.R "James" Chapman but Zebediah died shortly after birth in 1980.

After the divorced with Anne, Chapman married Lyssa Rai Brittain on June 22, 1982, and divorced on November 20, 1991. They have three children together, Barbara Katie "B.K" Chapman, Tucker Dee Chapman, and Lyssa "Baby Lyssa" Rae Chapman. Barbara died in a car accident in 2006.

In 1992, Chapman married Tawney Marie, but filed divorced in 1994 and officially divorced in 2002. Chapman later claimed,

"Tawny coerced me into marrying her. I told her I didn't want to marry her because I liked women too much to settle down ... I knew in my heart that marrying Tawny was a mistake. She was all wrong for me ... Despite my misgivings, I married Tawny ... It was a disaster from the start."

Chapman, his wife Beth Smith and sons Leland Chapman and Duane Lee Chapman II, and his daughter Lyssa Chapman all worked together as bail bondsmen and bounty hunters. They worked on the Dog the Bounty Hunter show, which ran for eight seasons on A&E.

Beth was diagnosed with throat cancer earlier in 2018. Some sources said that she began chemotherapy in Los Angeles on December 2018.

"The [treatments] are going well, but they certainly take their toll on Beth. She's a trooper though and a very tough lady."

Sources reported that she beat the same cancer back in 2017 and doctors found cancer returned all again.

Chapman's wife cancer started spreading into the lungs and reached in a stage four diagnosis. Later in June 2019, she was rushed to the hospital and placed in a medically induced coma. After days in the hospital, his spouse lost the fight against cancer and died on 26th June 2019.

Duane Chapman Net Worth and Height

Chapman was first married to La Fonda Sue Honeycutt. But later divorced, when Duane was in prison and married with Duane best friend. They have two children together.

After Chapman's divorce, he married Anne M. Tegnell.They later divorced after three years. They had three children but one died shortly after birth.

Chapman married for the third time with Lyssa Rae Brittain. They divorced after 9 years, They have three children together.

Chapman for the fourth time married Tawny Marie. They don't have any children together, Chapman later said, "Tawny coerced me into marrying her. I told her I didn't want to marry her because I liked women too much to settle down ... I knew in my heart that marrying Tawny was a mistake. She was all wrong for me ... Despite my misgivings, I married Tawny ... It was a disaster from the start."

Chapman is married to Alice Elizabeth "Beth" Smith Chapman. They meet 16 years before their marriage. They have two children together.

Christopher Michael Hecht is the first child of Duane Chapman from his teenage relationship with Debbie White. Christopher was adopted by his grandmother when his mother committed suicide. Chapman was later informed that he has a grown son and reunited with Christopher.

Leland is the second child of Chapman and La Fonda Sue Honeycutt. Leland and his big brother Duane was later reunited with Chapman after several years.

Zebediah Duane Chapman is the first child from Chapman second marriage with Anne M.Tegnell. She died shortly after the birth.

Wesley Chapman is the second child from Chapman's second marriage with Anne M. Tegnell. Wesley and his brother were raised by his mother.

J.R. "James" Chapman is the third child from Chapman's second marriage with Anne M. Tegnell. James and Wesley were raised by his mother.

Barbara Katie "B.K" Chapman is the first child of Chapman and Lyssa Rae Brittain. Barbara died in a car accident in 2006