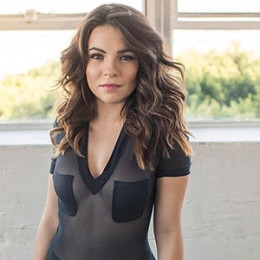 Brittany Cherry is an American dancer and choreographer who is a pro at the show, "Dancing With The Stars". She is trained in many dance forms like contemporary, hip hop, tap, ballet, jazz, Latin Ballroom and so on. While her main genre in dance is Latin Ballroom. Cherry came into the limelight after featuring in Ed Sheeran's song "Thinking Out Loud" where she performed a contemporary number.

Brittany Cherry was born on May 2, 1994, in Pleasant Grove, Utah, United States. She started dancing at an early age of three. She was born with a problem in hearing and had difficulty in language delivery.

Despite having a hearing problem she found herself linked to music and seeing that her mom enrolled her in a dance class at age 3. She trained herself in many dance forms like contemporary, hip hop, tap, ballet, jazz, Latin Ballroom and so on. After trying every other field like sports and others she realized that dance was the only thing that gave her comfort so she continued dancing as her career.

She and her dance partner entered on Dancing With the Stars Kids Edition when she was 13. She also won other many National Latin titles. To pursue a bigger career at dancing she moved to Los Angeles.

Cherry is professionally a dancer, choreographer and teacher who starred in the popular Fox's dance show called So You Think You Can Dance season 10. She stood 20th position in the competition but grabbed limelight by featuring on the show.

On the show as a participant, she performed a Funk Jazz group dance and a whimsical Broadway number which showed her versatility.

Cherry, later on, became one of the choreographers for the show, Dancing With The Stars. She was chosen as a pro and a dancer at the show alongside colleagues from her former show So You Think You Can Dance, Jenna Johnson, Lindsay Arnold, and Alan Bersten. Brittany Cherry in the music video of Thinking Loud.
Source: So You Think You Can Dance Wikia - Fandom

On the show, she danced alongside popular names like Pitbull, Taylor Swift, Kevin Hart, Jennifer Lopez, Meghan Trainor and many more. Cherry has taken part in three Dancing With the Stars national tours. She came into the limelight after featuring in Ed Sheeran's song Thinking Out Loud where she performed a contemporary number.

Cheery also got to join Ed Sheeran on his United States Tour. She performed in the EMA in Glasgow, Scotland. She also appeared in Killer Bodies in 2013 Crazy Ex-Girlfriend in 2015 and Building a Dances in 2018.

Cherry has earned a huge amount of income from her career as a dancer and choreographer but the amount has not been made public. She is associated with the famous show Dancing With The Stars where she is a pro choreographer.

The average salary of a dance choreographer in the United States is $49.8k. Whereas, the salary can range from $26k to $52k depending on the popularity of the dancer.

Cherry is in a relationship with her boyfriend named Bryan aka bryan.the dude. The couple has their photos together all over their Instagram which shows their love and chemistry.

Since they live a very low-key life no other information related to them and their relationship is available.

Cherry had it in her heart from a young age that she wanted to be a dancer later on. She was ready to face all the rejections she might have gotten and was willing to give her all to pursue her career in this field.

Not quite, but close enough

Her life is pretty stable now as she has achieved much success in her life and is determined to grow more as a dancer. She believes about living every journey and enjoying every moment as it passes by. Cherry has around 31.6k followers on Twitter and has a 108k follower on Instagram as of February 2019.