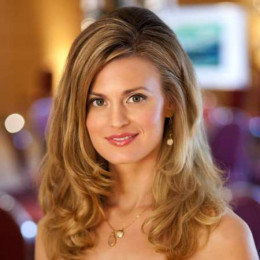 A Canadian actress Brooke D'Orsay who is better recognized for her appearance in in American TV shows such as Two and a Half Men and Royal Pains. She has also starred as Brooke Mayo on King's Ransom. She is of Huguenot origin. In 2001, she begun her career in film industry by starring in movie named "Why Can't I Be a Movie Star?" in the role of Jennifer Kruz. She has done voice acting as Caitlin Cooke on Canadian Animated Series 6teen too. She was also in the cast in Nickelodeon movie The Boy Who Cried Werewolf. She has also starred in some noticeable movies like The Republic of Love, Harold & Kumar Go to White Castle and It's a Boy Girl Thing.

Talking about her personal life, she is not known to be married yet. Though she has not married she was once in a relationship with her boyfriend turned fiance, Greg Coolidge who is also an actor and producer too.

Though D'Orsay is still silent about her dating life and boyfriend today, she wished Valentine's Day to all of her on-screen husbands.

She holds an estimated net worth of about $3 million as of 2019.

Brooke D'Orsay was born on 17 February 1982 in Toronto, Ontario.

She is renowned for her role as Caitlin Cooke on the Canadian animated series 6Teen. Also, she performed in Two and a Half Men and The Boy Who Cried Werewolf.