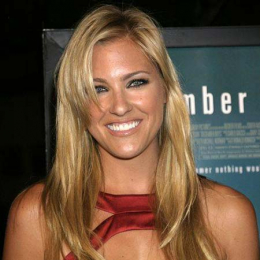 American actress, Candace Kroslak is popular for portraying the role of Lindy Maddock in the Swedish-American soap opera 'Ocean Ave'. She is also famous for her works in the films and television series like 'Planet of the Apes', 'CSI: Miami', 'What About Brian', and 'Shark'.

Candace was featured in the cover of April 2011 and 2013's issue covers of 'Runner's World magazine'. She currently models for the 'Wilhelmina Modeling Agency'.

Candace Kroslak is happily married to the well-known American actor Thomas E. van Dell. The duo shared the wedding vows on 23 June 2013 after dating for a couple of years. Moreover, they tied the knot in a private ceremony among their close friends and family.

The couple shares a good bond and is together for five years and is about to celebrate their six years of marital relationship this coming June. The pair is deeply in love and the relationship between them seems smooth as there is no sign of divorce between them. Despite their unconditional love, they are yet to share their first child together.

Kroslak is out of any dating rumors regarding her early life and is also out of any media controversies. Additionally, she is an active person on social media and often shares posts regarding her personal life.

What is the Net Worth of Candace Kroslak? Know about his Earnings, Salary

“You are not your emotions, but they do need a voice.” ~ Me Lately I have been teaching clients (and practicing myself lol) to speak their Truth OUT LOUD! It is one thing to understand what we feel but quite another to give it a voice. As you speak it into your life, you OWN it and give it power. As we feel it we heal it, but when we speak it we OWN it. As we own what we feel, we are owning our TRUTH #truthroom . This process “aligns” our life with our soul. I will be speaking about this in depth tomorrow morning 10am PST in my monthly membership! If you are not yet a member and wish to be, please click the link in my bio. Sending Lightto you all! #alignment #bethechange #lightworker #healing #happiness #mindfullness #inspiredyogis #unconditional #awakening #wisewords #spiritualcoach #candacevandell

The 40-year-old actress started her acting career in the film industry after working in the 2001 film named Demonicus. After that, she went on acting in many films like Planet of the Apes, Soul Survivors, American Pie Presents: The Naked Mile, and Take Me Home Tonight. Som of her blockbuster movies are,

As for her acting career, she debuted by performing in the 1997 television series named Wild On!. Since then, she worked in various television series like City Guys, CSI: Miami, Shark, How I Met Your Mother and many more. Besides, she also worked as a model and appeared in the covers of the April 2011 and 2013 issue covers of Runner's World magazine. What's more, she is currently working at the Wilhelmina Modeling Agency.

Candace Kroslak is presently married to the well-known American actor Thomas E. van Dell. The duo shared the wedding vows on 23 June 2013 after dating for a couple of years.