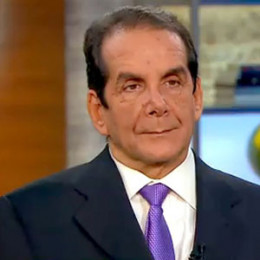 The winner of the 1987 Pulitzer Prize for distinguished commentary, Charles Krauthammer is an American syndicated columnist, author, political commentator and non-practicing physician. His work weekly column is syndicated to more than 400 publication world wide.

Krauthammer attended Hebrew Day School. He graduated from McGill University with First Class Honors in political science and economics. He then joined the Balliol College, Oxford where he became Commonwealth Scholar in politics. But after his degree in Political Science and Economics, he was quite confused about what to do in the future.

Charles then decided to follow in the footstep of his older brother he decided to do M. D. He earned his M.D from Harvard Medical School. But he instead, decided to opt for a degree in political philosophy regime.

Charles began his career as a chief occupant in psychiatry at the Massachusets General Hospital. In 1978 he served as a direct planning psychiatric researcher under the Carter administration.

In 1981, Krauthammer worked as a writer and editor for The New Republic. He started writing essays for Time magazine in 1983. The following year he was appointed board certified in psychiatry by the American Board of Psychiatry and Neurology.

Later in 1990, he became the weekly panelist for Inside Washington. As of now, he is working as the Weekly Standard editor and a nightly panelist on Fox News Special Report alongside Bret Baier.

Charles accomplished a lot throughout his career journey. He is one of the most intelligent and genius man alive. In 2006 he was entitled as the most influential commentator in America by the Financial Times. He received a Pulitzer Prize in 1987 for his weekly column in The Washington Post in 1985.

He was also awarded the Irving Kristol Award, People for the American Way’s First Amendment Award, Bradley Prize, the Champion/Tuck Award for Economic Understanding and the Eric Breindel Award for Excellence in Opinion Journalism.

Krauthammer was living a blissful and contented life with his wife, Robyn Threthewey Krauthammer and their only son Daniel Krauthammer. He first met his wife Robyn at the Balliol College at Oxford in 1972 and dated for about two years. Both of them had opted for the same degree.

The duo tied the knot in 1974. Robyn is a former lawyer and an Australian artist. The couple is blessed with a child named Daniel. He faced a devastating accident in his young age that changed his life ahead. He was severely injured while driving a car that made him hospitalized for 14 months.

The injuries left him paralyzed below the waist and used a wheelchair since the time. But sadly the American Columnist passed away on June 21, 2018.

He was married to his wife, Robyn for more than four decades. He died on his deathbed and the cause of his death was intestine cancer. Washington Post first confirmed about his death.

As a syndicated columnist, political commentator and physician Charles makes a decent amount from his career. His current estimated net worth is $8 million.

Robyn Threthewey Krauthammer is the beautiful wife of Charles Krauthammer. The duo married in the year 1974.

Daniel is the only son of Charles Krauthammer from his wife lovely Robyn Threthewey Krauthammer.