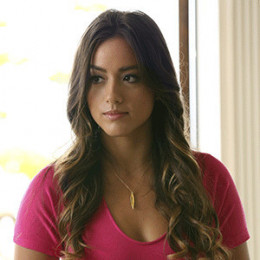 an American actress,Chloe Bennet Bennet Wang, an investment banker and Stephanie, an internist.She attended St. Ignatius College Prep.She released her debut single "Uh Oh" in both English and Mandarin, followed by "Every Day In Between" solely in English.n December 2012, Bennet was cast as a series regular on the ABC series Agents of S.H.I.E.L.D. which premiered on September 24, 2013, where she portrays the character Daisy "Skye" Johnson / Quake.

Chloe Bennet was born on April 18, 1992, in Chicago, United States. She is the daughter of a Caucasian-American internist, Stephanie Wang, and a Chinese investment banker, Bennet Wang. Her father belongs to Han Chinese ethnicity whereas her mother is of Caucasian-American ethnic background.

Bennet has six brothers. Three of them are biological, two are foster and one is adopted. Two of her brothers are African-American and one is Mexican-Filipino. The actress is American by nationality. She attended St. Ignatius College Prep and graduated when she was 15.

Chloe lived with her grandmother in Shanghai and later moved to Beijing, where she released her first solo album Uh Oh. She returned to California in 2010.

Chloe made her first on-screen appearance as a host for the short-lived TeenNicksummer dance series titled The Nightlife. In 2011, she appeared in a music video for South Korean band BIGBANG's extended play musical recording Tonight.

Having trouble gigs with her last name, she changed her last name to Bennet after pursuing an acting career in Hollywood. In the year 2012-13, she played a recurring supporting role in the ABC drama series Nashville as Hailey.

In December 2012, she received an opportunity to work as a series regular on the ABC series Agents of S.H.I.E.L.D. in which she is seen as the character Daisy "Skye" Johnson/Quake.

Most significantly, Chloe started dating actor Austin Nichols in September 2013. The young Hollywood couple was spotted in Los Angeles every once in a while and had no problems sharing their relationship on Instagram. However, they got separated in June 2017.

"They have tremendous love and respect for each other but after almost four years together, they just drifted apart. Chloe and Austin decided to part ways about a month ago. There are no hard feelings."

Later, Bennet was rumored to be dating Logan Paul in July 2017 and Chandler Parsons in November 2017.

Chloe Bennet's net worth is estimated to be $4 million. Her source of income includes her salary and earnings from her career as a singer and actress. Chloe's yearly income is around $352,941, while her revenue from Sponsorship/Endorsement is $78,431.