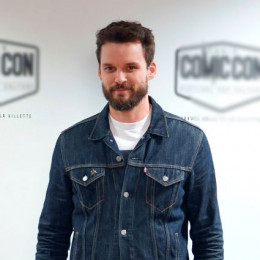 American actor, and director, Austin Nichols is best known from his roles in the movies and series like One Tree Hill, The Day After Tomorrow (the big budget environmental movie), Wimbledon and other. The handsome actor debuted from the movie, Durango Kids and made a series debut from Sliders and Odd Man Out in 1999.

Austin Nichols was born on 24th April 1980 in Ann Arbor, Michigan with the birth sign Taurus. Nicholas is American as per nationality and as far as his ethnicity is concerned, he is White. His parents David Nicholas (radiologist) and Kay Nicholas (a national and international champion in water skier) raised him with his older sister, Ashley.

Regarding his academics, Nichols finished his schooling at Casis Elementary School and McCallum High School in Austin. As raised by a spots lover mother, he was interested in sports from the very early age and used to play as well. Nichols began to play water skiing from the very early age of two and competed in the Pan-American Championship representing his country.

Nichols became professional in the game but was forced to leave the game only because of his shoulder injury. He then began to learn acting and started taking acting lessons. Moreover, to pursue his career in acting, Nichols moved to Los Angeles and joined the University of Southern California.

At the initial phase of Austin Nichols’ career, he gave an audition for several movies and got some small roles in some of them including Wolf Lake (by John Leekley), Watching Ellie (by Brad Hall), Family Law, Sliders (by Tracy Torme and Robert K. Weiss), Odd Man Out (by Ed Decter and John J. Strauss) and CSI: Crime Scene Investigation (by Anthony E. Zuiker).

After numbers of auditions, Nichols got two episodes in an American drama series, Six Feet Under along with casts Michael C. Hall, Peter Krause, Lauren Ambrose, Frances Conroy, Rachel Griffiths, Freddy Rodriguez and others. His another movie, The Day after Tomorrow is counted as one of the big budget ($125 million) environmental movie based on global warming which was released 2004 where he shared the screen with Dennis Quaid, Jake Gyllenhaal, Ian Holm, Sela Ward, Emmy Rossum and others.

In 2007, Nichols signed a contract with HBO and appeared in several series under the networks including John from Cincinnati. Among all the series of him, he is best known for the series by Mark Schwahn, One Tree Hill where he appeared along with stars Chad Michael Murray, James Lafferty, Sophia Bush, Hilarie Burton, Paul Johansson and so on.

As of 2016 and 2017, Nichols worked in the various series like Ray Donovan ( by Ann Biderman), The Walking Dead (by Frank Darabont), and Bates Motel (by Carlton Cuse).

As of now, Austin Nichols is single after multiple breaks up in his past and now he is not spotted with any ladies and also gave no clues regarding his relationship issues. Apart from this, Nichols was in a relationship with an actress, Chloe Bennet from 2013 which went exclusively when they were spotted kissing together in a bar.

The couple were very close together and were even seen hanging out together in various places and also in the events and ceremonies. Moreover, their fans were even expecting for their marriage as they shared a great chemistry between them but after dating for almost four years, the pair broke up in 2017 due to some unknown reasons which made their fans very disappointed.

Before dating Bennet, Nichols was in a relationship with his ex-girlfriend and a co-star of him, Sophia Bush. The couple had an on-off relationship together for almost 6 years and got separated in 2012.

Besides the relationship issues, Nichols was once pulled up after he drove his car on a wrong way in the street of Jackson, Michigan. He was even accused of a drunk and drive so was arrested for both of the cases. Later Nichols was released after paying a certain amount as a bail.

37 years old actor, Austin Nichols is tall and has a good height of 6 feet 3 inches (1.91m). The man with such a numerous series and movies collected an estimated net worth of $4 million.

Nichols appeared most of the hit movies that have a good collection at the box office including The Day After Tomorrow ($544.3 million), Wimbledon ($41.5 million), Glory Road ($42.9 million) and others.

With such amazing income, he owned a house in New York that looks not less than a mansion and also a luxurious car.