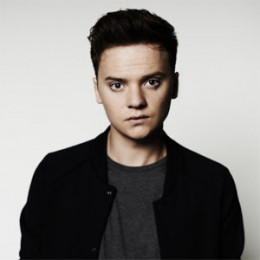 Conor Maynard is an English singer, songwriter, record producer and actor. He has two siblings, a brother, Jack Maynard, a YouTuber and a sister, Anna Maynard. Maynard started his career as a YouTuber in 2006 and released his debut single Can't Say No in 2012. He has over 6.7 million subscribers on his YouTube channel, Conor Maynard as per January 2018. Maynard was honored with MTV's Brand New for 2012 award in January 2012 with approximately 48% of the public vote.

Born Conor Paul Maynard, Conor Maynard was born on 21st November 1992, in Brighton, England, UK. He is the son of Gary Maynard and Helen Maynard. He has two siblings, a brother, Jack Maynard and a sister Anna Maynard.

Maynard holds English nationality and is of Caucasian ethnicity. He studied at Cardinal Newman Catholic School in Hove.

Maynard started his career as a YouTuber in 2006 and uploaded his first video where he appeared singing Breathe. The same year, he performed in the Sky 1 television series Dream Team.

From 2009, he started uploading cover songs with rapper, Anthony "Anth" Melo. Maynard caught the attention of American singer and songwriter Ne-Yo as he watched his track's Beautiful Monster cover song and became his mentor.

Soon EMI/Parlophone and Turn First management hired him and the agency inspired him to write songs. Maynard released his debut single Can't Say No which ranked #2 in the UK Singles Charts and debut studio album, Contrast in 2012.

He was also compared with Canadian singer Justin Bieber, however, Maynard stated: "I'm not like Justin Bieber" and explained his voice is very different from Bieber.

Maynard was honored with MTV's Brand New award in January 2012 with approximately 48% of the public vote. His second single, Vegas Girl, released on 21 July 2012 in the UK. His other albums are Understand Me, iTunes Festival: London 2012, Pop Kan, and Turn Around.

In March 2014, He also sang in England's World Cup song in 2014 collaborating with his fellow pop singers Eliza Doolittle, Emma Bunton, Katy B, and others.

Currently, Conor Maynard hasn't confirmed anyone as his girlfriend officially. He is possibly single. He previously dated model Victoria Tansey. The couple first met at a photo shoot and then started dating in 2013. They separated in 2015. Reportedly, Maynard was spotted in Tinder after his break up with Tansey in 2016.

Maynard was romantically linked to singer and actress Preeya Kalidas in 2013. He, however, denied the rumor via his tweet in February 2013 stating Kalidas as his good friend.

Anna, his sister also featured in his several covers on YouTube, including Run, Havana and If I Were A Boy.

Maynard's estimated net worth is $6 million. The huge part of his net worth is accumulated from recording selling, concerts and as a career as YouTuber. He has over 6.7 million subscribers on his YouTube channel, as per January 2018.

As a YouTuber, he uploaded several cover songs of biggest artists and has over 1 billion views so far. Reportedly, he earned an average of $2,600 per day ($950,000 a year) from ads in his videos on YouTube and also earned an extra monthly fee from YouTube Red viewers.

His debut album, Contrast was ranked #1 on the UK Album Chart and around 17,000 copies of the recording were sold in its debut week. Further, his other albums Understand Me, iTunes Festival: London 2012, Pop Kan, and Turn Around were also warmly received by his fans. This also helped the added figure in his net worth.

Live musical tours is also one of his main source of income. His concert at the Capital Summertime Ball in 2012 had over 80,000 crowds. His upcoming concerts are going to be held in The Vamps Manchester Arena, Manchester, UK in May 2018, London, United Kingdom, and several other parts.

Conor Maynard has been involved in several charity events. In 2013, he attended in Charity Auction for Matching Partner's Canine Rescue! along with Ne-Yo and Tulisa. He performed in the We Day UK charity event and concert in The SSE Arena, London on March 22, 2017. Conor along with his brother Jack also collected funds for Global's Make Some Noise.