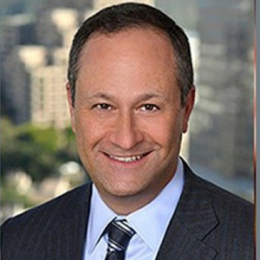 Emhoff is a litigator who specializes in entertainment and intellectual property law and currently is a litigator and partner at DLA Piper Law Firm. He is popularly known as the husband of the sitting US Senator and presidential election 2020 nominee "Kamala Harris".

Is Douglas Emhoff Married? Know More About His Personal Life and Relationships

Douglas Emhoff is married to US Senator and nominee for Presidential election 2020 Kamala Harris. The couple married on August 22, 2014, in a private ceremony at the Santa Barbara Courthouse.

Happy Father’s Day, @douglasemhoff. You are a terrific husband and wonderful father to Ella and Cole. I can’t wait to celebrate tonight with steak and homemade fries.

The couple honored Emhoff's faith and included Jewish tradition such as breaking glass at the wedding. Also, the wedding was officiated by bride sister Maya Harris West.

Emhoff and Harris first met in a blind date set up by Harris close friend Chrisette Hudlin. They really hit off in their first meeting and soon started dating. On March 27, 2014, after a year of dating, Emhoff proposed to Harris with a diamond and platinum engagement ring.

The couple is successfully married for over four years now and does not have any children. However, Emhoff has two kids, Cole Emhoff, and Ella Emhoff from a previous marriage to producer Kerstin Emhoff.

The children are very welcoming to Kamala Harris and affectionately call their stepmother "S-Mamala" or "Momala". Harris has addressed their family situation in an interview and stated:

"We sometimes joke that our modern family is almost a little too functional, Our time as a family is Sunday dinner. We come together, all of us around the table, and over time we've fallen into our roles. Cole sets the table and picks the music, Ella makes beautiful desserts, Doug acts as my sous-chef, and I cook."

Emhoff usually remains out of the spotlight, however, a recent incident at Move On Forum brought him into the limelight. A protestor at that forum came into stage and tried to hackle the mike from Harris, Emhoff came on the stage to diffuse the situation and was captured scowling at the protestor.

Emhoff when not busy protecting his wife from protestor and litigating enjoys golfing and playing fantasy football.

Douglas Emhoff, 54-year old boasts an impressive net-worth of $1.5 million. He earned this wealth through decades of work in the legal field.

That moment when you walk by the tv in your office lobby and see your wife speaking to Jake Tapper on that tv...

Emhoff is a litigator who specializes in entertainment and intellectual property law and currently is a litigator and partner at DLA Piper Law Firm. The average earning of a litigator in the US is $141,470/year.

Douglas Emhoff was born on October 13, 1964, in New York to a Jewish family. He is of 5 feet 8 inches with black hair and brown eyes. 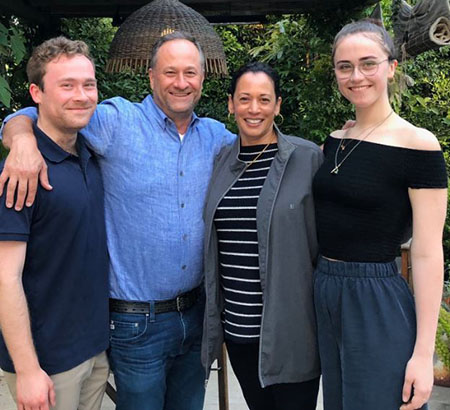 Emhoff moved to California in his teens and attended California State University, Northridge and got a BA in Communications and Media Studies degree in 1987.  He graduated from the University of Southern California Gould School of Law in 1990 with his Juris Doctor.

Emhoff after college invested in Venable LLP which was later bought by a different company and thus moved to his current job at DLA Piper Law Firm.

Kerstin Emhoff is movie, documentary and music video producer. She is also a philanthropist and is a big supporter of Kamala Harris.

Kamala Harris is a lawyer and US Senator representing the state of California. She is running for Presidential nominee from the democratic party in 2020.

Cole Emhoff is the first child of Douglas Emhoff and Kerstin Emhoff. He graduated college from Colorado in 2017.

Ella Emhoff is the second child of Douglas Emhoff and Kerstin Emhoff. She is studying at Parsons School of Design.