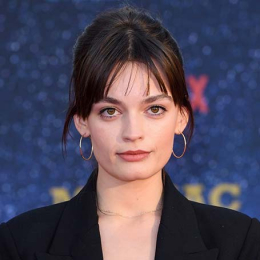 Finding limelight isn't hard when you are a talented actress who holds both stunning physics and acting skills. Emma Mackey lies upon those French-British actresses who became famous for just appearing in one web series. Well, she is popular for starring in the Netflix series "Sex Education". The 25-year-old actress is also recognized for working in the 2018 film entitled 'Summit Fever'.

Personal Life of Emma Mackey; Who is she Dating?

Emma Mackey is currently in a dating relationship with the famous actor Dan Whitlam. The duo shares a good bond and is a relation from a certain time. Moreover, the duo is open about their dating life and often shares their pictures together in social media.

Here have a look at the duo sharing a passionate kiss!

The fact that the ceiling is made entirely of flowers definitely outweighs the fact that this was taken in the loo right? Cool yeah that's what I thought. Happy Valentine's Day mon amour

Emma is out of any rumors and controversies regarding her personal and professional life. In fact, the actress is straight minded and focused on her acting career as she falls in no controversies. Besides, she is currently living a blissful life as an actress with the love of her life Whitlam.

The pair is spotted arm in arm on a romantic outing back in April 2019. She couldn't stop herself packing on the PDA with her love Whitnam during the Cannes Series Festival in the South of France in April the same year.

Though it's still a mystery how they began dating, Mackey first shared an image of her beau in January 2018. Since then, they share sweet snaps on each other's Instagram accounts. They shared a snap of themselves kissing at Annabel's on Valentine's Day.

How much Net Worth does Emma Mackey Hold?

Emma Mackey holds an estimated net worth of $200,000. She is able to garner that fortune working in various acting and modeling projects. In addition, the average salary of television actress is $9-$100 per hour which depends upon the popularity of the actress and the volume of the television series. Similarly, the average salary of a film actress is $17.00 per hour and $81,000 annually.

Comfiest trousers EVER. Big thank you to @netflix @theresamarx and @lucy_up

The 25-years-old actress started her acting career working in the 2016 television horror film named Badger Lane portraying the role of Michelle. Besides, she is currently starring in a British comedy-drama Netflix series named Sex Education. Until now, she appeared in the eight episodes of the series with the main role Maeve Wiley. Further, she stars along with the stars like Gillian Anderson, James Purefoy, Patricia Allison, and many more.

Channelling my inner punk/ Big Maeve Energy for @i_d Big thank you to the team: Photography by @_vickiking Styling by @victoriayoung_ Hair by @shioritakahashi Make-up by @lauradomini2

The Netflix actress also tried her hand in the film industry starring in the 2018 film Summit Fever. Furthermore, she worked along with the Freddie Throp directed by Julian Gilbey.