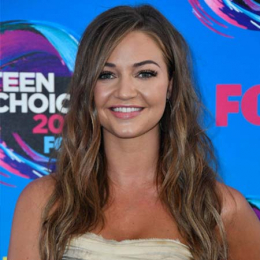 In this modern world, there are many platforms on social media where one can get both name and wealth by showcasing their skills. Youtube has become one of those platforms where many people are gathering fame. Well, Erika Costell is one of those Youtuber who is famous for uploading their vlogs and song videos with the addition of reaction videos.

The 26-years-old YouTuber is also modeling who is ruling the modeling world with her stunning physics and charming face. She is popular for representing famous brands like Ideal Fit Models, Wilhelmina International. She won the Teen Choice Awards under the category of Music Web Star in 2018.

Personal Life of Erika Costell; Is she dating Someone?

Erika Costell is possibly single as of now. The well-known model is currently out of any dating relationships and seems focused on her career. Moreover, she is always in the media limelight, all thanks to her career as a Youtuber and model.

Erika was previously dating her long-time friend Jake Paul. Jake is also a popular Youtuber who features many comedy sketches, vlogs, and songs. Further, the duo officially started dating from the April of 2018. They used to share a good bond initially, but, later the pair felt some highs and lows in their relationship. And they separated just after eight months of togetherness.

Erika is currently out of any dating rumors regarding her dating and romantic life. Similarly, the famous model is also out of any controversies regarding her professional life. Additionally, she is an active person on social media and often shares her pictures on her Media accounts.

What is the Net Worth of Erika Costell?

The 26-years-old model officially started her modeling career at the age of 16 after her old manager Larry Murdock took her to a photo shoot. She holds a stunning physics and with that, she represented many brands like DAN Talent Group Inc., Wilhelmina International, and Ideal Fit Models. Further, she is a member of the social group Team 10.

As for Erika's singing career, she released her first ever song named Jerika along with Jake Paul featuring DJ Kade. The song was charted on the Billboard Hot 100 and Canadian Hot 100. Since then she dropped many albums which include There for You, Chitty Bang, Not Her, Karma, Dynamite and Thots not Feelings.

Erika is an active Youtube star who regularly posts vlogs and reaction videos on her channel. She officially became the Chief Operation Officer of Jake Paul's Team 10 following the departure of former COO Nick Crompton. Furthermore, she recently signed with the popular American music and entertainment company The Orchard.