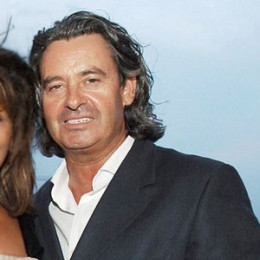 Erwin Bach is famous for being the husband of Tina Turner, who is considered as the queen of Rock and Roll. He also worked as a music producer and record company executive. Apart from the field of music, he is also involved in acting and is mostly known for Maldito Amor: Demasiado Tarde, 60 Minutes and Oprah’s Next Chapter.

The talented music producer was born on January 24, 1956, in Germany. He holds German nationality and belongs to Caucasian ethnicity. His birth sign is Aquarius.

Bach started his career as a music producer and record company executive. Following his career in the music industry, he consequently started acting career and has featured in Maldito Amar: Demasiado Tarde, 60 Minutes and Oprah’s Next Chapter.

Erwin has appeared as a managing director of EMI Recorded Music Switzerland and has boosted the career of groundbreaking acts as Manu Chao and Radiohead.

The long time record label executive has credited with being instrumental in the success of several major artists including Paul McCartney, Pet Shop Boys, Queen and Pink Floyd as well as Turner, his wife. He also served as divisional managing director of EMI Germany.

Erwin wedded his long time girlfriend of 27 years Tina Turner in July 2013 after on the shores of Lake Zurich in Switzerland.

After some days of their marriage, the couple threw a grand star-studded party at the lakeside estate. Among 120 guests, Oprah Winfrey, Giorgio Armani, David Bowie, Eros Ramazzotti and Sade celebrated the event.

The couple's estate was decorated with 70,000 red and yellow roses from Holland. Men wore black tie and women were specially requested to wear white and beige.

Tina, on the other hand, wore a gown designed by Italian fashion giant Giorgio Armani. She met Erwin for the first time in 1985. They were initially friends; eventually dated the following year. The husband-wife don't have any children still now.

Erwin and his wife Tina have multiple houses in different countries, the pair currently resides in Switzerland.

The popular actor, Erwin Bach and a singer Tina Turner were married in July 2013. Tina was her first wife but Erwin was her second husband.