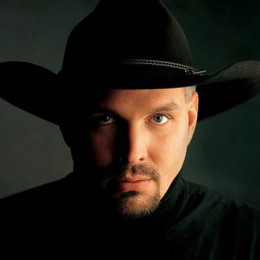 Garth Brooks is a renowned American country singer and songwriter. He was son to Troyal Raymond Brooks, Jr and Colleen McElroy Carroll. When he was small his parents used to host talent shows every week at their home and he used to take part in that show along side his sister. He attended Oklahoma State University after he got scholarship. He had a rough start of his career. In 1989 his first album, an EP became hit #2 on the Country Billboard. By the time of his retirement in 2009 all his six album he released went Diamond. For his great success he has been named as the Best-Selling Solo Artist of the Century in the United States by RIAA.

Garth Brooks' First Marriage with Sandy Mahl Ended in a Divorce; Who is he married to now?

Exploring his personal life, he has already been married twice. His first marriage was with his college sweetheart Sandy Mahl with whom he was so much in love.

Garth Brooks and his wife Trisha Yearwood sharing a passionate kiss on stage.

Sadly, Garth and Sandy's relationship couldn't survive the test of time and they decided to call it quits. The couple filed for divorce on November 2000, though the couple had already been living separately since1999.

According to the divorce files, Garth cited irreconcilable differences as the reason behind their divorce. Back in an interview in Good Morning America, the man openly discussed that his relationship with Sandy is on the verge of breaking. After finalizing his divorce with Sandy, the man even took a break from his career.

"I think because we are honest with each other and you talk to each other.You talk about happiness. The big word in a relationship for me is respect, and do we have that for each other? If you don't, then you must try and find it. If you can't find it, then is your position better as friends, finding that someone for Sandy that makes her feel like she really likes herself, and for me to find somebody that makes me feel like I really like myself."

He also mentioned how divorce worked quite well for him and his children.

Their divorce was finalized on December 2001. But despite their separation, the former flame remained good friends just for the sake of their three kids.

After some time of the divorce, he fell in love with the country singer, Trisha Yearwood. The couple tied the knot on 10 December 2005.

I’m lucky that she’s in love with the boy. @TrishaYearwood the @opry is lucky to have you... and so am I!! love, me pic.twitter.com/AgcwIadPKi

The lovely pair celebrated 20 years of togetherness in March 2019 while their fans were so excited to congratulate the lovely duo. Even though the couple do not share any kids, Trisha is happy being the step-mother to his three kids with Sandy.

Prior to marrying Garth, she was in a marital relationship with two other guys namely, Christopher Latham from 1987 to 1991, and Robert 'Bobby' Reynolds from 1994 to 1999.

In his long illustrious career, Garth has won almost every prize that a singer dreams of. From Grammy to Billboard, you name it. In total, he is the recipient of 13 American Music Awards.

Troyal Garth Brooks was born on 7 February 1962 in Tulsa, Oklahoma.

As per the report of RIAA, he is the best-selling solo albums artist in the U.S. with 148 million domestic units sold.

He is the only artist who received diamond status in all his seven albums in the United States in 2019.

She was his college sweet heart. They met at a bar where he was a bouncer. Reason behind their divorce is still unknown.

It was his second marriage and her third marriage. After dating some time they changed their relationship into marriage. Together they are parents of three children.

She is the eldest daughter of the family. She resembles more like her mother.

She is very cute and gorgeous. Her picture can be found in different sites.