Alyssa Milano is an American Actress, producer and former singer who is widely known for her role as Samantha Micelli on the ABC sitcom Series “Who’s the Boss?”. Born in Italian-American family, Milano is a daughter of the film music editor Thomas M. Milano and fashion designer Lin; she was born in Brooklyn, New York, U.S.A. She has a younger brother Cory who is an actor. Her career started at the age of eight when she won an open audition for a national tour of Annie.

Alyssa Milano was born on December 19, 1972, in Bensonhurst, Brooklyn. She is a daughter of Lin Milano, a fashion designer, and Thomas M. Milano, a film music director. She is American and belongs to White ethnicity.

Milano attended the Buckley School in Sherman Oaks, California. Without notifying her family, Milano's caretaker took her for auditioning for a national touring company and she got selected as one of the four girls out of 1500.

In August 1984, Alyssa Milano made her film debut in the drama entitled ‘Old Enough’, a "great" way for "starting out". The film won First Prize as well as screened at the Sundance Film Festival.

Milano played a role as a teenage prostitute in the 1992 independent film named 'Where the Day Takes You’, this movie focuses on a group of a young runaway and homeless teenagers. This movie was nominated for the Critics Award at the Deauville Film Festival and also won the Golden Space Needle Award at the Seattle International Film Festival too.

In late 1996, Alyssa Milano was offered a role of Jennifer Mancini on the drama entitled ‘Melrose Place’ made by producer Aaron. Similarly, in 2007 she worked in a commercial television advertisement for ‘Veet’ and ‘Sheer Cover’. In the same year, she filmed a pilot for ABC named ‘Reinventing the Wheelers’.

On 20th March 2009, it was announced that Alyssa Milano voiced in Dr. Ilyssa Selwyn in ‘Ghostbusters: The Video Game’. Her baseball fandom entitled ‘Safe At Home: Confessions of a Baseball Fanatic’, was released on 24th March 24, 2009.

She also signed on to star in and produce a romantic comedy where she plays a woman with a relationship dilemma entitled ‘My Girlfriend's Boyfriend’.

In October 2004, Alyssa Milano participated in UNICEF's "Trick or Treat" campaign as the national spokesperson. 'The Sabin Vaccine Institute named Alyssa Milano as a Founding Ambassador for the Global Network for Neglected Tropical Diseases.

It is an alliance formed to advocate and mobilize resources in the fight to control neglected tropical diseases (NTDs), where she donated $250,000.

On 19th December 2009 during her 37th birthday, Alyssa Milano ran an online fundraising campaign for 'Charity: Water'.
As well as, in 2016, on her Twitter account, Alyssa Milano expressed her support for 'Hillary Clinton', a presidential candidate. 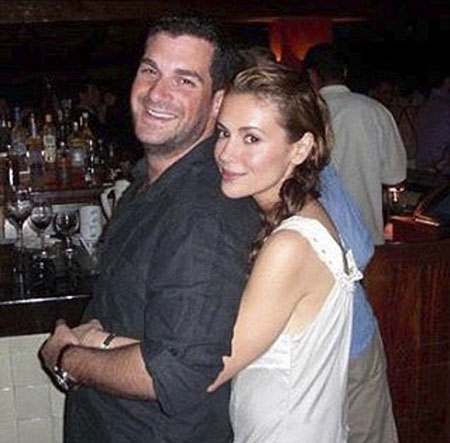 Her daughter, Elizabella Dylan Bugliari was born when she completed filming the 2nd season of 'Mistresses' (2013).

Previously, she was married to Cinjun Tate, the lead singer of the rock group, 'Remy Zero.' They married on 1st January 1999 and divorced on 20th November 1999.

Milano has dyslexia. During an interview in 2004, she explained how she deals with the disorder.

More than that, she won three times Kids Choice Awards in a category of Favorite TV Actress for her movie Who's the Boss? in 1998,1998 and 1999.

Alyssa Milano has also nominated for Young awards in a category of Exceptional Performance by a Young Actress Starring in a Feature Film 'Comedy or Drama'. She gets her nominated for Annie awards in a category of Outstanding Individual Achievement for Voice Acting by a Female Performer in an Animated Feature Production for her work 'Lady and the Tramp II: Scamp's Adventure'.

The gorgeous 5 feet 2 inches tall actress Alyssa Milano has a net worth of $45 million which made her one of the richest Hollywood female celebrities.

Besides this, her movies did a marvelous job at the box office and she charged a huge sum for her appearance on movies.

Alyssa Milano and Brian Bloom, an actor are good friends, but many suspects that these two had to have hooked up at some point.

Alyssa Milano dated her 'Charmed' co-star Brian Krause from 2000 to 2001. Alyssa Milano briefly dated Justin Randall Timberlake, a singer, songwriter, and actor after he broke up with Britney Spears in 2002.

Milano and William Frederick "Fred" Durst, a musician and film director from Jacksonville, Florida was rumored to be romantically involved for a few months between 2002 to 2003. Alyssa Milano dated Eric Dane, an actor in 2003.

In 2003, Alyssa Milano was spotted in the company of Carl Pavano, a former professional baseball player. There was a rumor that Alyssa Milano hooked-up with her 'The Outer Limits', her co-star Jason London, an American actor.

She was rumored to have been romantically linked with her 'Fear' co-star Mark Michael Wahlberg, actor, producer, and former model and rapper.

When she was in her teenager, Alyssa Milano and Kirk Cameron, an actor dated in the mid-1980s.There was also rumored that she has dated Corey Feldman, actor and singer in the late-1980s.

Milano reportedly dated Wayne A. "Beaner" McBean, a retired ice hockey defenceman in 1990. She dated David Arquette, an actor, film director, producer, screenwriter, wrestler, and fashion designer in 1991.After meeting on the set of 'Double Dragon' in 1993 Milano and Scott Wolf, an actor dated for a few years.

Alyssa Milano reportedly dated an actor, Jimmy Federico early in 2003. She dated Canadian actor, Corey Haim for a few years when she was a teenager. Milano and Brian Bloom, actor, voice actor are good friends, but many suspects that these two had to have hooked up at some point.

She married Cinjun Tate who is a guitarist, singer and a member of the band Remy Zero. The couple got married in January 1999, but it didn't even last for a year when they divorced after ten months of marriage. Even though they are now separate, Alyssa states that Cinjun is still her best friend.

She married an agent of Creative Artists Agency whose name is David Bugliari. Now, the couple has a son Milo Thomas and daughter Elizabella Dylan in the family. At present, Alyssa and her family reside in New Jersey, U.S.

He was born healthy weighed 7 lbs,19 inches long. Milo's photo can be found on the internet and on her official site with her carrying a baby.

Elizabella was born in Los Angeles, weighing 7 pounds, 7 ounces; and she was 19 ˝ inches long.