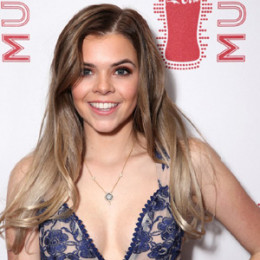 Griffin Arnlund is an American model as well as social media personality famous for her videos on YouTube. She is currently dating the YouTube star, Mikey.

Griffin Arnlund was born on October 24, 1997. She is a native of Montana, the U.S. Her birth sign is Scorpio.

Arnlund is a model and social media personality. She founded her self-titled YouTube channel GriffinArnlund on August 15, 2013, whereas released her first video on January 4, 2014. Her incredible work garnered her numerous fans.

She has also posted video collaborating with The Rad and Reckless. Besides YouTube, she is also active on Instagram and has more than 460,000 followers.

Her videos mostly consist of tips and tricks which can be used in daily lifestyle and fashion beauty tips. She has been associated with "E.I.F. cosmetics" and attended BeautyCon.

She also used the platform to take up anti-bullying initiatives and fight against several social issues like domestic violence and sexism.

Arnlund is in a romantic relationship with her boyfriend, Mikey Murphy. Mikey is a well known You Tuber with 1.3 million followers in his YouTube channel.

The duo shares a strong bond. They also posted the video boyfriend tag on YouTube in 2015.

As a social media personality and model, Arnlund certainly earns a decent amount from her career. Her net worth is possibly not less than six figures.