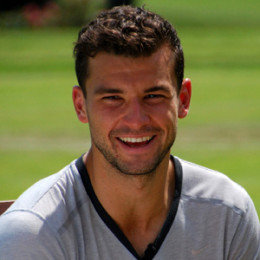 Grigor Dimitrov, a Bulgarian professional tennis player, is ranked number 8th in the world by ATP. He started his career right from the early age and today is one of the successful and highest paid tennis players in the world. Apart from his professional life, he is currently happy with his gorgeous girlfriend, Nicole Scherzinger after multiple failed relationship in his past.

Born on 16th May 1991 in Haskovo, Bulgaria, Dimitrov is the son of Maria Dimitrov, a sports teacher and a former volleyball player and Dimitar Dimitrov, a tennis coach. His birth sign is Taurus.

His father was his first coach during his childhood. Moreover, to improve his playing skill, he joined Sanchez Casal Academy where he was trained by Emilio Sanchez and Pato Alvarez. A year after the training he moved to France and joined Patrick Mourtoglou’s Tennis Academy.

Dimitrov began his career at an early age. At the very beginning of his career, he won the U14 European title and a junior cup when he was only 14. Keeping the same spirit, he again won the Orange Bowl U16 boys singles. During his junior year, he won many of the matches including Wimbledon against Henri Kontinen and US Open against Devin Britton in the same year (2008). In 2007, he participated in the US Open but did not win the tournament. But after a year he proved himself and won the tournament.

In 2009, he was granted a wildcard to perform in the ABN AMRO World Tennis Tournament and made his first ATP main draw win. But in the second round, he lost against Rafael Nadal and again was granted another wildcard for the Open 13 but this time also he did not win and was defeated by Gilles Simon in the first round.

Furthermore, in 2010, he was in the quarterfinal as a challenger in the event of the Internationaux de Nouvelle- Caledonia. After that in the same year was qualified for the Australian Open but lost the match against Robert Kendrick.  During the same year, he was at the hang-Sat Bangkok Open and defeated 20 players including Konstantin Kravchuk, Dmitry Tursunov, and others. In addition, he won his first ATP tour match of the Aegon Championship in London after many losses.

Moreover, in 2011 he failed to win any of the matches. He participated in many of the tournaments like the US Open, Wimbledon, French Open and Australian Open as well but succeeded to reach the second round only.

In 2012, the same thing repeated and his losing streak continued in 2013, but this time he succeeded to reach the third round and show his skills. In 2014 he was in the quarterfinals of Australian Open and was in the semifinals of Wimbledon but did not win both of the tournament.

In 2017, he won Cincinnati Masters defeating Nick Kyrgios in the finals. He played numerous tournaments in which won some of them and lost some of them, but he never lost his confidence and spirit.

The handsome hunk, Dimitrov is not married yet but is in a relationship with glamorous, talented actress, Nicole Scherzinger since late 2015. The couple looks too good together and can be even determined as one of the hottest couples of the town.

Apart from the current affair, Grigor Dimitrov was involved in multiple affairs in his past. A Russian tennis player, Maria Sharapova falls on top of his girlfriend's list with whom he dated in late 2012 but got separated years after linking up.

Furthermore, there is another lady as well on the list and she is non-other than female powerhouse player Serena Williams, but the couple never gave any clues about their relationship. It just turned out to be baseless rumors.

Dimitrov, such an amazing player might have an estimated net worth in million. He has earnings of $7.8 million from the games and won a cash prize of $2.3 million as well. So, is listed as the world’s highest paid tennis player in 2015.