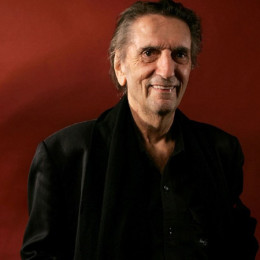 A native of West Irvine, Stanton was born on July 14, 1926. He is the eldest son of Ersel, a cook and Sheridan Harry Stanton, a tobacco farmer as well as a barber. He grew up with his younger brothers Archie, Ralph, and Stan.

He went to Lafayette High School and graduated from the University of Kentucky in Lexington in journalism and radio arts. He used to perform under theatre director Wallace Briggs at the Guignol Theatre. He then attended the Pasadena Playhouse in Pasadena, California.

Harry Dean Stanton began his career performing in theatre. Afterward, he decided to make his appearance in Hollywood productions and made his television debut in 1954 in Inner Sanctum. Stanton made his film debut with the Western Tomahawk Trail. He then played a cameo role in Pork Chop Hill in 1959, followed by the minor roles in films like How The West Was Won and The Man from the Diner’s Club.

He also served as a cook aboard the USS LST-970, a tank landing ship during World War II, Battle of Okinawa. He often performed in indie and cult films like Two-Lane Blacktop, Cockfighter, Escape from New York and Repo Man. He also appeared in Hollywood mainstream productions such as Cool Hand Luke, The Godfather Part II, Alien, Alpha Dog and The Green Miles.

His fame reached the prominent level when he landed the lead role in Wim Wenders’ Paris, Texas in 1984. He made his most praised appearance in the series like Gunsmoke, Rawhide, The Untouchables, Bonanza and The Rifleman. Later he made cameo appearances in the hit series Two and a Half Men, and movies like Pretty in Pink and Red Dawn alongside stars Sean Penn, Elvis Costello, Jon Cryer, and Charlie Sheen. In 2006 he was seen in the HBO television series Big Love.

Besides that, he appeared in the Dwight Yoakam music video for Sorry You Asked and Bob Dylan'sDreamin' of You. He also played harmonica on The Call's 1989 album Let the Day Begin.

In 2010, Stanton was seen in TV series Chuck followed by a brief cameo in The Avengers and Seven Psychopaths. In 2011, in his honor, the Lexington Film League created an annual festival, the Harry Dean Stanton Fest. In 2013, he made his appearance in Arnold Schwarzenegger action film The Last Stand.

In 2017, he was cast in Twin Peaks: The Return and Twin Peaks: Fire Walk With Me. He made his last on-screen appearance in Frank and Ava and the lead role in Lucky.

The legendary actor Harry Dean Staton was a career oriented person and never mixed up his private life with his profession. Not once did he speak about his affairs or love life.

On 15 September 2017 America lost one of the talented personality Harry Dean Stanton. Harry died at the age of 91 after battling cancer for a long time. He took his last breath at the Cedars-Sinai Medical Center in Los Angeles, California.

Stanton earned a lucrative amount from his career as an actor, musician, and a singer. His estimated net worth was $10 million.